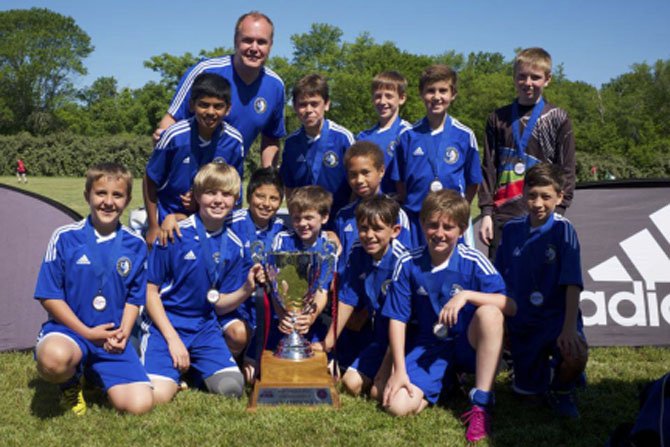 On Memorial Day weekend, the Great Falls Soccer Club (GFSC) Everton (U12 Boys) competed in the Dynamo Capital Cup in Richmond, and brought home the championship trophy. What made this championship even sweeter was winning the U12 11 versus 11 bracket. This was the first time the Everton has competed in a 11v11 tournament (usually reserved for U13 and above).

Everton went undefeated with three wins and no losses and outscored their opponents by a combined 15 goals for and zero goals against. In game one, they played SASA Revolution (from Stafford, Va.), winning 7-0. Next up was the tournament host, Dynamo Navy. Despite a valiant effort, Dynamo was unable to stop Everton’s offensive attack and lost 7-0. With this impressive win, Everton found themselves in the championship game against SYA Cardinals (of the VCCL), who were also undefeated and had beat their previous two opponents by a combined scored of 14-1.

The championship game was exactly what everyone expected: a low-scoring, back-and-forth possession game. Both teams took numerous shots on goal, only to be thwarted by the goalies and the goal posts. In the final minutes of the first half, Everton was fortunate enough to receive and score a penalty kick. Heading into the half with a slim 1-0 lead, while not ideal, was all that was needed to finally win the game. The second half went scoreless, and the exhausted Everton, coached by Craig Scott, walked off the pitch as champions.

For interested players, Everton will be holding U13 tryouts for the 2013-2014 season on the following dates: June 5, 11, 13. Contact the team manager, Luis Robles, at lu.robles@verizon.net if you are interested in trying out for the Everton team.