From Police Officer to Prosecutor
Votes

From Police Officer to Prosecutor 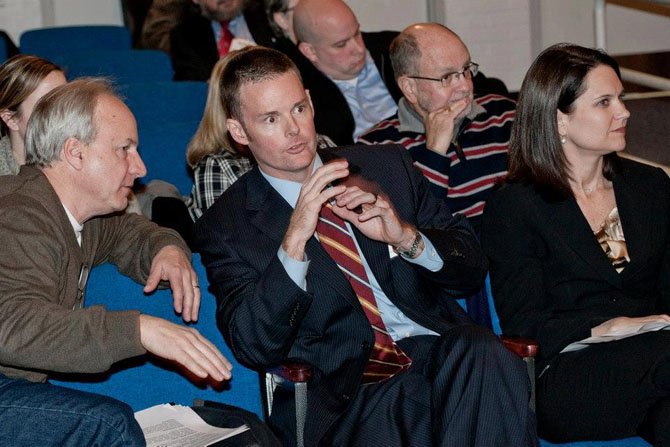 Alexandria — Sitting in the audience with 600 peers and colleagues at the Spring 2013 Institute of the Virginia Commonwealth Attorney’s Association, Alexandria Assistant Commonwealth’s Attorney Bryan Porter, 43, heard a description being read of the award-winner of the prestigious 2013 Von Schuch Award. Without forewarning, he suddenly realized he was the chosen recipient of this prosecutorial distinction which is analogous to the “Who’s Who” of the most respected prosecutors in Virginia. “It’s very humbling to know you’ve been recognized by your peers,” Porter said.

Porter, a former cop, served as a Metro Transit officer followed by his service with the Alexandria Police Department for a little over five years. When he was in college, his father encouraged him to go on a police ride-along with the APD. “I thought it was awesome,” Porter said, and following graduation from college, he pursued a job in the field.

Though he left APD for a short period of time to attend law school full time, he missed the department and returned to law enforcement. He worked his shifts and attended law school at George Mason University at night. Initially, his plan was to remain in the police department after finishing law school but Commonwealth’s Attorney Randy Sengel had an opening and wanted Porter on board if he passed the Bar exam. “It was a very difficult decision for me,” Porter said.

“He’s high on the integrity chart. As a cop, he was extremely hard working, very smart, and cared about the law.”

Porter took the leap and joined the Commonwealth Attorney’s Office as an Assistant Commonwealth’s Attorney. “I was in it long enough to know what it was about. I still miss it,” he said of his days as a law enforcement officer.

“I still remember what it was like to be a police officer. I expect a lot from our police department. Policing is a very noble job. Officers need to be aware of and in tune with the law,” Porter said.

Employed in the Commonwealth Attorney’s Office for 12 years, he is one of the more senior professionals in the office. He handles all police cases, and he will handle the trial of the shooting of Alexandria Police Officer Peter Laboy. He handles all felony gun cases, felony narcotics, and violent crimes.

His experience as a police officer combined with his prosecutorial expertise has enabled him to understand people and situations: “I’m a pretty good judge of character. It can be easy to lose sight of the fact that every person is a human being. Most are people who made a mistake or error in judgment. I feel that I’m pretty good at showing leniency where merited. Reaching a balance is the hardest part — when to go hard core or show someone a chance for leniency.”

Porter is known in professional circles as a man of integrity and one who is passionate about whatever he pursues. He is recognized as a hard worker, dedicated, thorough, and one who always strives to excel. “He’s high on the integrity chart. As a cop, he was extremely hard working, very smart, and cared about the law,” said Captain Shahram Fard of the Alexandria Police Department, who worked with Porter on the evening shift and ran calls with him when he was on the department. Fard noted that Porter handled cases in a way that attracted the attention of other jurisdictions. “He will stay until the wee hours of the night and work on weekends. He always goes the extra mile and many more beyond that,” Fard said.

Elliott Casey, a Special Assistant United States Attorney in the Western District of Virginia, recalled observing Porter testify in court when he was a law clerk for the judges. According to Casey, Porter has three outstanding qualities. First, he has a very strong sense of justice. “Bryan is very invested in the community he is in. For him, it is very important for him to have the best result,” Casey said. Second, he has excellent instincts. Casey explained that Porter is able to evaluate a case to get it right and can understand the people and how they think. Third, he is a brilliant communicator. “I’ve seen him make amazing closing arguments in court,” Casey said.

In addition to his prosecutorial duties, Porter is actively involved in training his colleagues in the criminal justice system.

In addition to sharing a good relationship with the police department, Porter also maintains a good relationship with members of the Bar Association. His wife, Karin, presently is a defense attorney and previously was a former prosecutor who worked in the office where she and Porter met. His brother, Scott, is currently an Assistant Commonwealth's Attorney in the Arlington County Commonwealth’s Attorney’s Office.

With the upcoming retirement of Sengel, Porter has decided to make a political run for Commonwealth’s Attorney.

Karen L. Bune is a freelance writer. She serves as an adjunct professor at George Mason University and Marymount University where she teaches criminal justice.