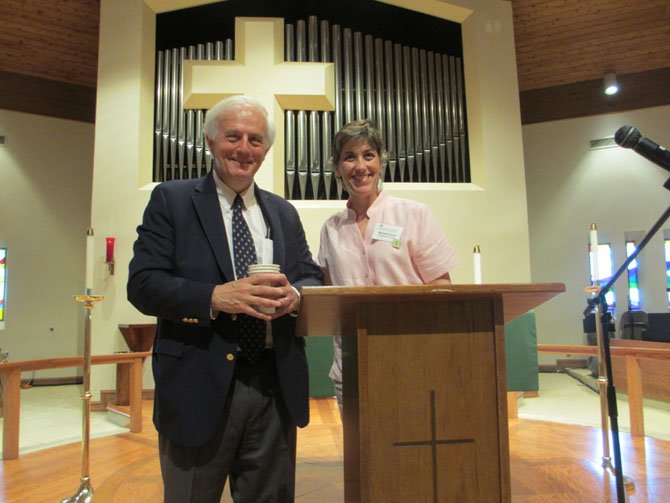 Bob Levey’s 37-year career with the Washington Post spanned the eras of Watergate, Desert Storm and the rise of Internet news reporting. For 23 years, Levey wrote Bob Levey’s Washington, a personal look at the region he loves. He shared his experiences on June 10 with guests of Shepherd Center of Oakton-Vienna’s Lunch ‘n’ Life, drawing on anecdotes and perspectives.

“Journalism is a transaction,” said Levey. “Without someone on the receiving end, there’s no journalism.”

Levey has the distinction of being the first reporter hired by Post editor Ben Bradley, now 90 years old. During the hiring interview, Bradley asked Levey the title of the most recent book he read. “Better Bidding in Thirty Days,” Levey told Bradley, who immediately went into the intricacies of bridge hands. Levey got the job.

Levey’s desk sat between that of two investigative reporters, Bob Woodward and Carl Bernstein. “It was the journey of a lifetime,” said Levey, speaking of the Post’s golden years. “It was so fascinating, so compelling.”

Reporting on the 1968 D.C. riots as they fanned, Levey’s front-page news accounts catapulted him to the White House as a Post journalist. He was just 23 years old. After six months of his White House assignment, Levey recognized what he wanted to become once again—a local news reporter, covering Washington’s community of residents and businesses. For the remainder of his media career, 45 years of it, Levey has focused on the human interest elements of the region. Bob Levey’s Washington, published in the Post for 23 years, captured the soul of the communities in the metro region.

At the end of 2003, 54 senior reporters at the Washington Post were offered a buy-out. Levey was one of them. Even today, he continues to write, from columns for the senior Beacon to writing books. He consults with non-profits on matters of published materials, and has written three books over the years. Levey is as active today as he was when he went out into the newsworld more than 40 years ago.

In his new life, he is a national champion bridge player, partnering with other players who, in essence, hire Levey to enhance their level of play.

Levey, at one time or another, worked at nine radio stations, for television, and co-founded—more than 20 years ago—WashPost.com. His bad-weather updates at WTOP, the world’s top-billing radio station, kept listeners glued to the station.

Reflecting on the changes in the media he has witnessed, the great, award-winning journalists he worked alongside with, the momentous events he was a part of, Levey said, “it’s been a great adventure under most unusual circumstances.”