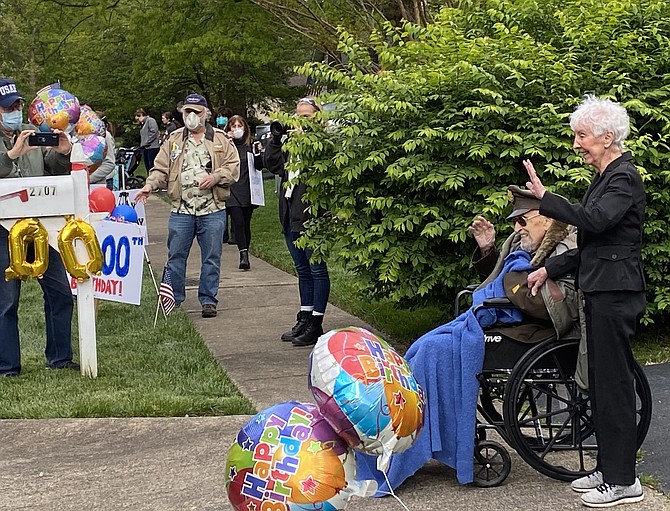 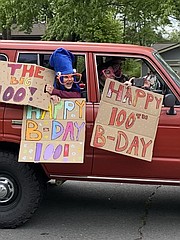 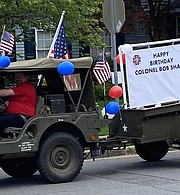 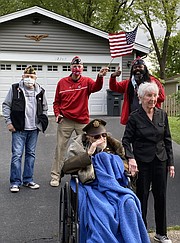 A 100th birthday hurrah to Retired Air Force Col. Robert A. Shawn of Herndon, accompanied by his wife, Julia and by his comrades at Veterans of Foreign Wars Loudoun County Post #1177, (from back left) Richard Bruns Post Senior Vice Commander, Philip Rusciolelli Past Commander and Ray Delpesche, Post Commander.

Retired Air Force Col. Robert A. Shawn of Herndon turned 100 years old recently. A member of Veterans of Foreign Wars Loudoun County Post #1177, Shawn's comrades at the Post could not let one of their fellow defenders of freedom go without recognition on his momentous day, COVID-19 or not. "He's the heart of our Post," said Philip Rusciolelli, Past Commander of VFW Post 1177.

Post members are veterans who served in one or more of the United States military actions – World War II, the Korean War, the Vietnam Conflict, Desert Shield/Desert Storm, actions in Bosnia and other distant places, and most recently, during the current Global War on Terror. They organized the drive-by caravan parade to honor the colonel. "We love Colonel Bob," said Richard Bruns Post Senior Vice Commander, adding, "He is one of the few World War II survivors."

Shortly before 5:30 the evening of May 6, Retired Col. Shawn, the fighter pilot who flew a reported 328 missions during his 30-year career spanning World War II, the Korean War and the Vietnam Conflict sat at the end of his driveway with wife, Julia Shawn, beside him. For more than a half-hour, a reported 120 vehicles decorated with homemade banners and signs, American flags and birthday wishes, slowly drove by his Herndon home. Police cruisers from the Herndon and Fairfax County Police Departments and others joined.

The words, "Happy birthday, Colonel" and "Thank you for your service," echoed as the vehicles circled the cul-de-sac in front of where the colonel sat with his wife, Julia, standing beside him. The years may have slowed the colonel down a bit, but as each American flag passed by him, Col. Robert A. Shawn United States Air Force (Retired) saluted. Social distancing guidelines kept the colonel from verbally expressing his thanks to all, but Julia extended her appreciation to everyone for coming out. Ray Delpesche, current Post Commander of VFW Post 1177, said, "Col. Bob is a wonderful example to follow with patriotism and love of country."