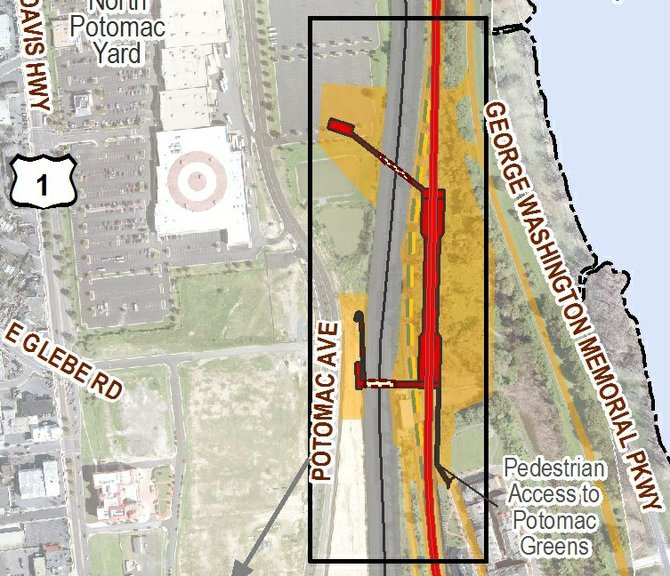 Alternative B is between the George Washington Memorial Parkway and the CSXT Railroad, north of the Potomac Greens neighborhood, east of the existing Potomac Yard Retail Center and the CSXT right-of-way. The station would be at-grade, with a side platform layout. Additional station facilities include two pedestrian bridges from the station over the CSXT right-of-way to the planned development in Potomac Yard as well as a pedestrian bridge over the proposed Metrorail alignment to provide access to the Potomac Greens and Old Town Greens neighborhoods. Alexandria Department of Planning and Zoning 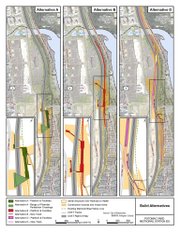 For years, city officials and Deleware-based CPYR have been planning to build a Metro station known as Alternative B — a design that would allow direct access from land owned by the developer to a new Metro station. Now that plan has been cast into doubt because the design for Alternative B requires encroachment onto land owned by the National Park Service, which would be legally forbidden from selling their land to the Washington Metropolitan Area Transit Authority. That means the city risks losing out on $49 million worth of developer money riding on the selection of Alternative B, according to terms of a 2010 memorandum of understanding between city officials and CPYR.

"In refining the design, it very well may be possible to keep the tracks where they are and not have to move them eastward," said Deputy City Manager Mark Jinks. "Therefore, we would not need to have land transferred from the National Park Service to WMATA."

The catch is that accomplishing the reconfigured design would reduce the maximum speed from 55 miles and hour to 50 miles an hour. Jinks said that a reconfigured Alternative B would "probably add a couple of seconds" to the total trip. But he added that he was optimistic that a new design for Alternative B would avoid land owned by the National Park Service while meeting the needs of the Metro system. Even if they lose the $49 million from the developer, Jinks added, the design for Alternative A costs about $50 million less than Alternative B — so the issue with federal land does not jeopardize the funding scheme.

"Alternative B is not about providing better transportation to people who use Metro," said Katy Cannady, a frequent critic of city government. "It's about providing maximum density and maximum profits for the developer."

Photograph of the Potomac Yard about 1972.

POTOMAC YARD is a 300-acre brownfield in the northeast corner of the city, just south of National Airport. Since prehistoric times, the area has served as a north-south trade and transportation corridor. From 1906 to 1987, Potomac Yard served as a major point of freight transfer between northern and southern rail networks. Today, the site is divided into two main parcels: Potomac Yard and Potomac Greens. These parcels are adjacent to a 120-foot wide active railroad corridor, which includes a Metro line that began operations in the 1980s. The North Potomac Yard Small Area plan approved by City Council in the summer of 2010 calls for a Metro Square neighborhood built around the selection of Alternative B.

"This neighborhood is the transit hub of North Potomac Yard, where the Metrorail station, dedicated high-capacity transitway, and local and circulator bus services will converge," the plan explains. "Two important public spaces define the character of the neighborhood, including the square park at the center of the neighborhood, and a possible internal pedestrian connection."

Financing the station creates financial risk for the city government, which will have to bankroll the construction without help from federal or state sources of revenue. City officials are expecting Potomac Yard to generate $1 billion worth of revenue in the next three decades, an expansion of the tax base that would help fund construction of a Metro station that could open its doors as early as 2018. But city officials acknowledge that they must carefully manage the risk.

"Sure there's a risk, and it's a big project so it's a big risk," said Frank Shafroth, director of the Center for State and Local Leadership at George Mason University. "That's why it's important that the city recognizes the risk because that allows the city to control it."

ASIDE FROM THE ISSUE of using land owned by the National Park Service as part of Alternative B, city officials are also wrestling with another vexing problem that haunts the Potomac Yard Metro station — a scenic easement. A city park north of Potomac Greens has a scenic easement placed on the property in 1999. That's when the landowner traded a scenic easement to allow for more development in Crystal City in exchange for protection of this stretch of land, a wooded stretch of property with a trail and a playground.