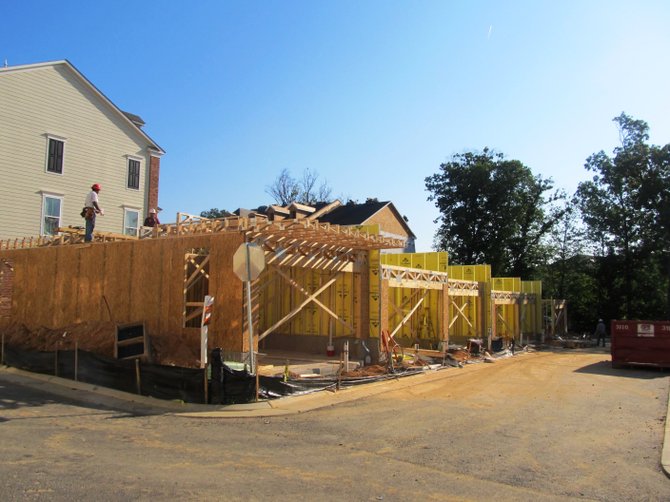 Location, location, location. Pulte’s new MetroWest development in Fairfax boasts location as a draw for buyers. The 50-plus townhome development is next to the Vienna Metro and “two minutes” from I-66. For more information, go to www.pulte.com/communities/va/fairfax/metrowest. Photo by Victoria Ross.

In February, Patricia Stack, a broker with Weichert Realtors, held an open house for a single-family home for sale in Vienna just listed for $739,000. Within three hours, more than 70 people toured the home. 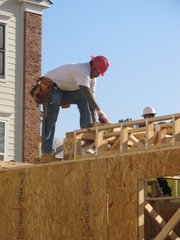 “2013 has started with a bang in Northern Virginia real estate … the market is more like 2005-2006 than anything we've seen since.”—Patricia Stack.

“The housing numbers are overwhelmingly positive, especially in markets such as Northern Virginia, where employment is strong.”—Lawrence Yun, chief economist for the National Association of Realtors.

In addition to housing starts, almost every other housing indicator has trended up from May 2012 to May 2013 in Fairfax County, according to Real Estate Building Intelligence (RBI)—a company that analyzes market trends and statistics from the Multiple Listing Service.

In the past decade, while new housing developments were being built in Prince William and Loudoun counties, Fairfax County was pretty much built out. If buyers wanted a newly-built home, they had to tear down an old one.

“Demand for housing is up, and so are development applications,” said Supervisor John Cook (R-Braddock), who noticed the trend last year and formed a land use development advisory committee in his district in response to the rise in applications.

Targeting empty-nesters who are looking for less square footage and less yard, but larger than the typical townhome, Oakton East offers 3,700-3,800 square feet of finished living space, a two-car garage and gourmet kitchens.

While townhomes, condos and apartments are typical for infill developments—both because of their small footprint and the higher price per square foot builders can charge—there are several new single-family infill developments in the county.

The National Association of Home Builders/Wells Fargo housing-market index rose to 52 in June—the first time the index has reached above a key reading of 50 since 2006—from 44 in May. Readings above 50 signal that builders, generally, are optimistic about sales trends.

"The economic base of Fairfax County has been sufficiently diversified over the years that declining revenues in federal contracting will not be devastating to the economy as a whole,” Gordon said. “Corporate additions to Fairfax County in recent years give us balance.”