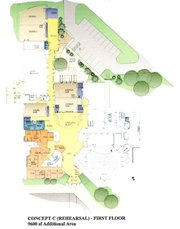 The McLean Community Center board approved plans for renovation and expansion of their Ingleside Avenue building Wednesday, Feb. 27.

The McLean Community Center Governing Board voted at their Feb. 27 meeting to go forward with a $6.1 million renovation of its Ingleside Avenue facility. At the same meeting they also voted to continue pursuing a land swap that could open the door for a new downtown facility.

Chad Quinn, head of the Capital Facilities committee pointed out several ways that the work on the current facility on Ingleside is a worthy pursuit.

“This is a financially prudent decision, to do the renovation. We will incur no additional debt, this is within our capital improvement funds. There’s an explicit need this is based off. This is not conjecture, this is based on facts and evidence of our needs for expansion,” he said.

Funding will come from the center’s Capital Reserve Fun, which has a balance of almost $8 million.

“The money is there to be spent, how it’s spent is up to the board,” said Ashok Karra, the center’s comptroller. 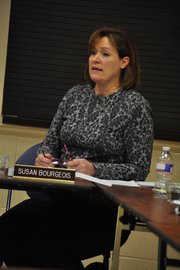 Susan Bourgeois, chair of the McLean Community Center board’s Downtown Committee, presents a motion to explore a possible land swap for a downtown facility at the board’s Feb. 27 meeting.

The plan would give center staff additional office space, as well as add rehearsal space, which Quinn says has been a need consistently voiced by the community.

“We have people literally working out of a closet they’re using as an office, and they deserve more functional office space. This is not by any means a gold-plated project,” he said. “Surveys and community feedback routinely bring up the need for a rehearsal hall, one of our biggest programming items, yet we don’t have the space, we sometimes have to turn people away because we can’t accommodate them. This will open up some space that is right now unusable and optimize the footprint of the building.”

Quinn also pointed out that the expansion efforts match the vision when the center was founded in 1975, to create a campus setting.

THE BOARD also approved a motion to pursue a possible land swap in downtown McLean which could allow them expanded space in the property where the old McDonald’s sits in exchange for the land where the Old Firehouse Teen Center currently sits.

Downtown Committee Chair Susan Bourgeois said a potential exchange would be made with Edgemoor Infrastructure and Real Estate, a division of Clark Construction, which focuses on public-private partnerships for public facilities.

“The motion passed by the board allows them to begin discussions about a possible swap and a possible partnership.

Bill Sudow of the McLean Revitalization Corporation explains a proposal that would involve a land swap for the McLean Community Center’s Old Firehouse Teen Center at the MCC’s board meeting Wednesday, Feb. 27.

With the help of Edgemoor and Dan Montgomery [president of Clark Construction] who does own the McDonald’s site is to put forward a proposal for locating an architecturally significant facility right in the center of McLean,” said Bill Sudow, a member of the McLean Revitalization Corporation. “We see this as a possible catalyst beginning the development of downtown McLean.”

While the board agreed to begin discussions about a new facility, several board members were skeptical about the need for a renovated building on Ingleside and a new building downtown.

Board members Robin Walker and Jay Howell mentioned that they were against the renovations when it was unsure what sort of space and programming would be opened up with a downtown expansion. Board member Risa Sanders said an expansion might not even be necessary.

“This facility [on Ingleside Avenue] has been in need of these improvements for a long time,” she said. “We haven’t yet determined whether there will still be a need for a downtown facility if we take care of this property.”