Reston Man to Walk Across America for Charity
Votes

Reston Man to Walk Across America for Charity

“One step at a time.” That’s his standard reply when anyone asks 36-year-old Cody Thompson of Reston how he is going to walk coast-to-coast, approximately 2,728 miles, from Wrightsville Beach, N.C., to Redondo Beach, Calif., starting on March 10. The answers get a bit more complicated when you ask “Why?” 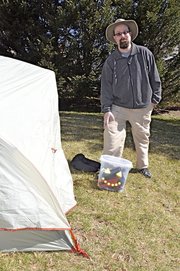 Cody Thompson of Reston sets up his tent for one last spray with industrial-strength insect repellent in his father's Lorton yard. On Sunday, March 10, he will be putting this and his other gear to serious use as he sets out to walk across America from Wrightsville Beach, N.C., to Redondo Beach, Calif.

Thompson will be walking to raise awareness—and hopefully funds—for the charitable organization, Child’s Play, which provides toys and games for hospitalized children around the world, largely through the generosity of the global gaming community. When he was only 4-years-old, doctors prescribed video game play as therapy following eye surgery. “My interest in the games sure stuck! They helped me a number of levels and I couldn’t think of a better charity to support with my efforts.” Thompson believes that his walk may also help dispel some of the negative stereotypes associated with what he calls his “lifestyle—not a hobby.” “It’s not all about violence or anti-socialism. Gamers and games can and do accomplish a lot of good,” he declared.

Support for the charity and defence of his fellow gamers are important to Thompson, but he admits there are other reasons for his decision to take on this Herculean task. “Even before I connected the walk with Child’s Play, the dream to do this was there.” Thompson says that the seeds for his own epic journey began with reading the J.R.R. Tolkien books, starting with “The Hobbit,” and just kept growing. “I wrote on my blog that the idea for my grand adventure came from those books, which I hold dear to my heart, but there’s another, truer story behind all this.” 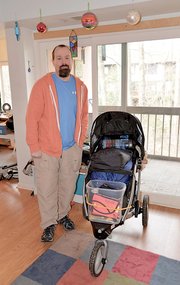 Cody Thompson poses with what will become his new BFF—a specially outfitted baby stroller that he will use to carry his gear on his walk across the country. Having had knee surgery just weeks ago, a traditional backpack would have meant too much weight to carry.

One day, more than three-and-a-half years ago, Thompson was sitting at work at the job he had held for almost 10 years. A story came on the news about a 16-year-old boy who was walking from Miami to D.C. to highlight the plight of homeless youth. “This kid, from a loving home, with parents willing to follow him in their car, did this thing. I was amazed.” So Thompson made his first attempt—which never got off the ground. “I had no idea how much time, planning and training was necessary,” he admits. “I never got out of the planning phase. My erratic schedule made things difficult, but, really, I guess I just wasn’t ready to do it.”

Then came what Thompson describes as “the perfect storm.” He changed jobs in July of 2012, deciding it was just time. The new job was good, but he soon realized that he had simply exchanged locations without really making any substantial changes. So on Aug. 7, with the support and “tireless assistance” of his wife, Elika Naraghi, Thompson made the planning and preparation for his journey his new fulltime job.

“I am a real creature of habit,” he says. “This is way outside my comfort zone and I admit that I am somewhat scared, but this is just something I feel I have to do. I have a good life and have accomplished things, but nothing like this.”

There’s been a lot of research in the months since. Thompson credits a number of people for their invaluable advice, in particular three others who made trans-continental walks who he met on-line. One took the “loneliest northern route,” one walked with her dog, and another made the trip from west coast to east. Thompson keeps in touch with all three and has put together his gear largely based on their experiences and a lot of reading and study of weather patterns and maps. On a chilly but bright Thursday morning, 10 days out, Thompson sat in his Reston apartment, going through his inventory and explaining what and how he will use to make his way across the country. For one thing, instead of a traditional backpack, Thompson will be pushing a stroller, specially outfitted for his gear. For a man who has had numerous knee surgeries, including once just a month ago, the stroller is the only way to go. “My doctor says I can do it, and I am only planning to average about 13 miles a day, so with the stroller and the route that I’ve picked, I should be good to go. I have logged hundreds of miles already and the knee has only done a bit of groaning.”

Thompson has chosen the middle-American route. He swears it had nothing to do with the Middle Earth of the Hobbits he loves to read about. This route means fewer mountains than the northern route, although the Smoky Mountains and other high elevations will still be in his direct path. “I was going to take Interstate 40 the whole way. Who knew it’s illegal to walk on a highway! So my path will pretty much run parallel to the interstate.” He will pass through places like Nashville, Memphis, Oklahoma City, Amarillo, Albuquerque, and Flagstaff before he hits the home stretch and the piece that worries him the most—the desert. His father, Paul Thompson of Lorton, is talking about trailing him by car for some of that desert portion. “It will probably be the toughest part of the walk. There’s nobody out there but you, but I don’t mind the solitude. Lot’s of time to think.”

While Thompson says he’s comfortable with so much time on his own, his plan for “accommodations” along the way relies heavily on the kindness of strangers. For safety and relative comfort’s sake, he hopes to pitch his tent and make his nightly home in yards and lands of friendly folks, only resorting to four-walled rest stops if weather makes this dangerous. “My wife Elika is going to be my ‘eyes in the skies,’ keeping track of potential weather problems—like tornado watches!” He has already been contacted by a few people who will be in his path, offering a place to camp or a hot meal and a shower, maybe even a chance to wash some clothes. That kind of connection with people he has never met is a large part of what motivates Thompson.

Equipped with a serious solar charger, Thompson will be staying in touch with friends, family and interested parties through his blog at www.walkinggamer.com. He also has more information and a video on www.indiegogo.com that includes a donation button. “Sponsorships have been a bit of a disappointment,” he admits. “I was hoping to raise the money I needed for the walk and then some for Child’s Play. So far, it’s been pretty much all out of pocket, but who knows? Maybe the amount will grow as people see I am serious about this.” On his website, Thompson clearly states how any money collected will be used, whether or not he completes the walk, and there are links to the Child’s Play site for those who would rather contribute directly to the charity.

Quick to thank all who have supported him, Thompson confesses he expects a few tears to be shed when he says good-bye at Wrightsville Beach. His wife, father, and possibly two sisters will be on hand to see him off. “No way could I do this without my incredible wife, Elika, my family, those walkers I ‘met’ on-line, my friends, and the wonderful and generous people I have already met and know I will meet out there on the road. It’s a journey of self-discovery. I don’t know what that even means right now, ask me when I’m done.”

The Connection will be checking in periodically with Cody Thompson, so stay tuned.