From Mount Vernon to Key West on a Bicycle
Votes

From Mount Vernon to Key West on a Bicycle 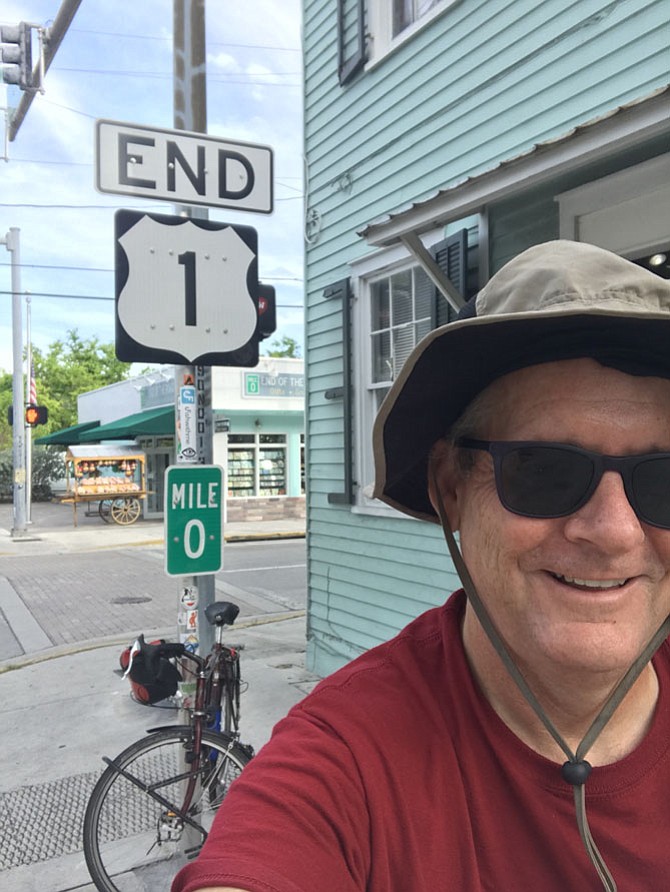 John Pickett at Mile 0 in Key West. Note the floppy hat he brought for the sun. It came in handy when the wind was blowing wet sand into his left eye coming down the Florida coast. Photo contributed 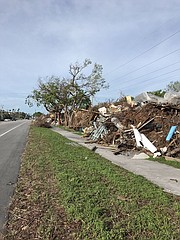 The debris piles along US 1, the highway to Key West, were ominous, and the bike trail to Key West was rendered useless by the debris. 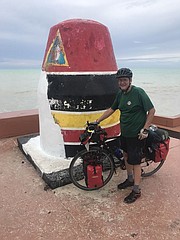 John Pickett in Key West at the Southernmost Point Buoy with the paint taken off by Hurricane Irma.

Taking a long trip after retiring is a quest of a lifetime for some, and for Mount Vernon resident John Pickett, the adventure of riding his bicycle to Key West was an experience he will not regret.

Although his total ride was 2,100 miles, the topography along the coast is fairly flat, and as he would find out the first day near Fredericksburg, climbing the biggest hill on the trip, by the Rappahannock River, was as bad as it was going to get.

He biked 88 miles on the first day and “it got easier after that,” he said.

He mapped out the route with help from “Adventure Cycling,” a company that maps out long cycling trips, packed up his tent and sleeping bag in four saddlebags on his 1991 bike and didn’t look back. “The original plan was to go from coast to coast,” he said.

Adventure Cycling Association is a nonprofit organization whose mission is to inspire and empower people to travel by bicycle, according to its website. Its maps cover 46,000 miles of potential bike routes for adventurists, and membership is open to anyone.

Pickett has lived in Mount Vernon since 1989 and uses the Mount Vernon trail on a regular basis. He’s taken long trips before, and learned lessons from each on routes, repairs, food and weather. He once was hit by the remnants of Hurricane Katrina in Ohio, rebuilt a rear wheel rim in Pennsylvania, and bounced from hostel to campground while biking through Indiana.

He left for Key West in September 2017, and had a string of motels, hostels, friends and relatives houses mapped out all the way south. He even met a few people along the way that turned out to be saviors with food, lodging and camaraderie. A cell phone was the only map he carried but there were folks along the way that seemed to go out of their way to help. Another website called “Warm Showers,” lists helping hands along the way, and he used it once and met “the nicest people in the world,” he said. “They fed me, let me do my laundry.”

When repairs were called for, there were always the bike shops. “Bike shops are great for bicycle tours, they drop everything to help you out,” he said.

There was rain and hours of riding by himself to along the way, but these were elements he did not mind. In South Carolina, he ventured to a campsite to a spot known as a hiker-biker site in the campground world, but “as soon as I got past the tree line, I was covered with mosquitos,” he said.

While Pickett was preparing for his ride, Hurricane Irma had just wreaked havoc in Florida, and he was a little concerned about that. Once in Florida, the storm debris was everywhere. Pickett rode into Miami Beach just as it was getting dark and stayed in a hostel for $25. “My meal cost more than that,” he said. While in Miami, he hit “king tide,” which is a large high tide famous in Miami, and the water came up to the middle of his tires.

From Key Largo at the top of the Florida Keys, he rode all the way to Key West, 100 miles in one day. In many places, storm debris took away the bike trail on the side of the road but the drivers gave him space as they passed. “I got to the buoy,” he said, referring to a buoy on Key West that marks the southernmost point in the continental United States. The paint on it had worn off from the hurricane that just passed through.

His return trip coincided with the baseball playoffs, and the Washington Nationals were playing the Chicago Cubs. He biked back up through Key Largo, then through the Everglades, and ended up in Fort Myers, hopscotching from one motel that was showing the baseball game to another. In Fort Lauderdale, he caught an Amtrak train back to Union Station in Washington, D.C. and unloaded his bike. “I rode home down the Mount Vernon trail,” he said.

Next month he’s heading off on a cross-country trip to Los Angeles on the same bike. He’s looking at the northern route through Ohio, or southern through Texas. “Don’t quite know the route yet,” he said. A visit to a friend’s place in Oregon is one stop he has scheduled, and the rest is still undecided. One thing that will be different on this trip is the camping gear he’s packing. He will bring a bear bag this time, to hang his food in trees so it’s there when he wakes up in the morning.