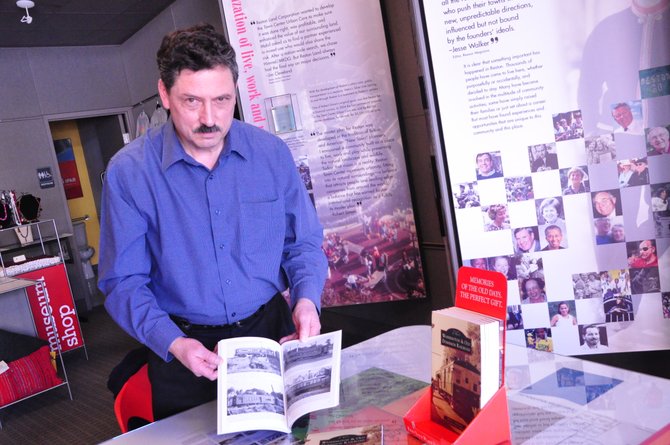 Author David Guillaudeu has released a book detailing the history of the W & OD Railroad, which runs through Reston. Photo by Alex McVeigh.

For a majority of the 1900s the Washington and Old Dominion Railroad provided transportation from the city of Washington, D.C., out to Loudoun County. Though it carried people, mail and other supplies along its route, the railroad faced difficulties throughout its history, eventually closing in August 1968.

“I concentrated on what it was like to work there and I was able to talk to people who had worked for the rail as early as 1926. I was looking for more of an in-depth look than just the workings of a railroad company.”

For author David Guillaudeu, the story of the W & OD railroad raised a lot of questions about the day to day operation of the railroad, questions he spent years answering for his new book “Washington and Old Dominion Railroad,” which chronicles the rail’s history.

“I wanted to focus on the history of the rail from past employees that were around the railroad, not just from financial and other documents like some other books,” Guillaudeu said. “I concentrated on what it was like to work there and I was able to talk to people who had worked for the rail as early as 1926. I was looking for more of an in-depth look than just the workings of a railroad company.”

The railroad was run by eight different companies over its history, bearing 10 different names. Its history runs back to before the Civil War, to the takeover by the U.S. military during the war, to its heyday in the early 1900s to the decline in ridership and mail transport due to the advent of the automobile and paved roads. 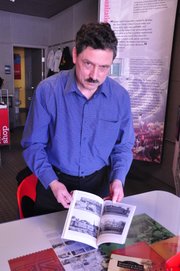 “Folks I talked to out in Loudoun remembered the rail very fondly, they were so appreciative of it because it was their lifeline to the city,” Guillaudeu said. “If they wanted a piano, it would come from the rail, so did the feed for their animals, the building materials for their houses and their mail until 1951.”

Guillaudeu conducted interviews as early as 1968, but he said he “wasn’t taking notes all the way back then, but I wish I had been.”

He said he was struck by how destitute the railroad often was, with operators struggling to even keep the rails up to standard.

“It was very poor, and so often they had to make due with what they could get, which included rail that they would turn over to the other side once the top side wore out,” Guillaudeau said. “A lot of their equipment was used, second hand, whatever they could scrounge up.”

The book also features more than 200 photos from the National Archives, Library of Congress, Fairfax County Libraries, as well as personal photos taken by nearby residents when the rail was still in operation.

Guillaudeu, a rail enthusiast, had been talking to people for years, but it wasn’t until he heard from Arcadia Publishing in November 2011 that he started to put it all together.

The book is for sale at the Reston Museum at Lake Anne, as well as at the Freeman House and Meadowlark Gardens in Vienna and online at the Fairfax County Park Authority website.