Sharks Take a Bite Out of Cancer
Votes

Sharks Take a Bite Out of Cancer 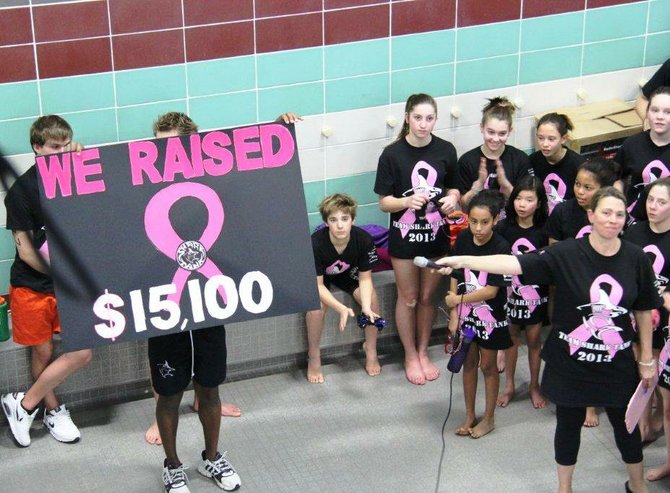 Shark Tank swimmers gather around coach Patty Friedman, co-founder of the team, as she announces the fundraising total for the Sunday, March 3, marathon to raise funds and awareness for breast cancer. Photo Contributed

Fundraisers and swimmers in Swim Marathon to Fight Breast Cancer:

On Sunday, March 3, 38 members of the Shark Tank Racing Squad swam for three hours to put a dent in that brutal statistic.

Each member swam three miles, and together the team raised more than $17,000 for breast cancer awareness and research during the 3rd annual marathon held at the South Run Rec Center in Springfield.

“It was beyond amazing,” said Shark Tank co-founder and coach Patty Friedman. “I have seen so much good in these little people. They are so inspired to do this, and they know their efforts make a difference.”

“This is a fantastic group of parents, coaches and swimmers. It brought tears to Patty’s eyes as when the band played the event’s theme song and kids came over to give Patti hugs,” said Supervisor Pat Herrity (R-Springfield), who has been a longtime supporter of the team and attended the marathon.

Herrity said the event has a special meaning to him. His mother is a 40-plus-year breast cancer survivor.

In addition to dozens of parents, supporters and community leaders, the Fairfax County Fire and Rescue team from Pohick Station 35 honored the team during the marathon.

“I told them before they swam that they would break bread with heroes, but that this time the heroes were honoring their heroic efforts,” Friedman said. “I also told them that somewhere nearby, a woman in a nearby hospital cradling her newborn girl would consider my team her heroes, because their efforts will help give her cherished baby a better chance at a life free of breast cancer.”

“Patty and her kids are pretty amazing,” Herrity said. “They raised more than $15,000 for breast cancer awareness, and more importantly, she is educating a whole bunch of kids on breast cancer and how important it is to contribute to your community.”

Friedman, known as an indefatigable coach and mentor, has made helping others a top priority for the team.

In addition to the team’s work raising money for breast cancer research, the swimmers assist needy families in Fairfax County by volunteering for Our Daily Bread, a Fairfax nonprofit.

Last November, Friedman challenged her team to contact needy families directly to see how they could support them. In January, the swimmers purchased groceries and then delivered them to 30 families with a total donation of $7,700.

Participating in a recent swim marathon to raise money in support of the Washington D.C. Avon Walk for Breast Cancer, they joined 28 additional swimmers to swim 220,000 meters and raise $12,000. This marks the fifth year that they have worked to raise money for breast cancer research and have been the fourth largest fundraisers for the Avon Walk for two consecutive years.

Last March, the Fairfax County Board of Supervisors recognized Friedman and the team for its work in the community.

“I am very proud to have such an engaged group of young adults in the community. They challenge not only themselves but make sure to give back to those in need in our community,” Supervisor John Cook (R-Braddock) said during the presentation.

“Many of them have done more than many adults will do in a lifetime,” Friedman said.

Friedman organized the team in the fall of 2009, and in 2010 the Shark Tank Racing Squad became a member of USA Swimming's Potomac Valley. By that time, more than half of the team's swimmers had qualified for and competed in championship meets.

Friedman, an avid supporter of breast cancer awareness, said she shares her passion with her swimmers because it “empowers them to make a difference in this world.”

Friedman said she was inspired by her friend Kim, whose mother died suddenly from inflammatory breast cancer several years ago.

“Each year, I tell as many people as I can what to watch for, why it is different than other breast cancers because this rare form of breast cancer takes 60 to 75 percent of the women who have it,” Friedman said.

The team will continue to raise money in preparation for the National Avon Walk for Breast Cancer on the National Mall May 4.