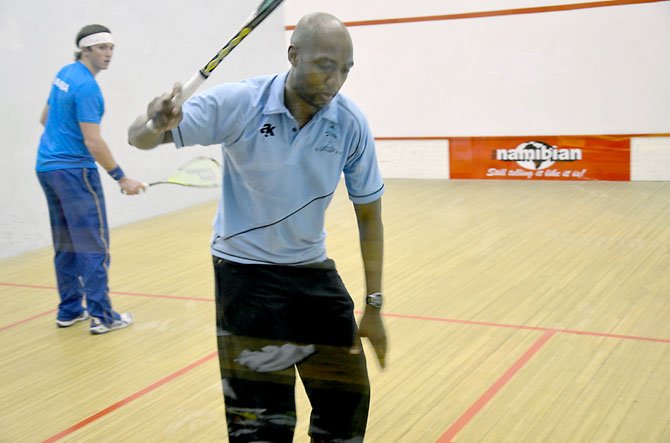 Lekgotla Masope, a squash instructor at Regency Sport and Health, with his partner Allister Walker, recently competed in the All Africa Senior Squash Championships in Namibia. Photo Contributed

McLean — During most of the year, Lekgotla Masope is teaching squash at the Regency Sport and Health in McLean. But for five days in February, he was representing his home country of Botswana in the All-Africa Senior Squash Championships in Windhoek, Namibia, where they took third place.

"It was a tough tournament, with a lot of squash played. We played three matches over the first two days, then it was two matches a day after that," said Masope, who has played professional squash for the past eight years. "I’m only used to about one match per day."

Masope, who is currently ranked the 132nd in the world, finished seventh in singles play, and his teammate and partner Allister Walker won. South Africa finished first in team play.

"Windhoek is a high altitude, which makes it a little bit tougher to play, especially for the U.S.-based players. It’s about the same altitude as Johannesburg, so a lot of the South African players were more used to it," he said. "We had to use a different ball than we use in the U.S. too, because of the altitude."

He said they usually play with a double yellow dot ball, which has the lowest bounce, but for this tournament they played a green, which has more of a bounce to it, as it’s meant for high altitude.

Squash is a game similar to racquetball, except played on a smaller court with a ball that doesn’t bounce as much. It is a sport growing in popularity, and Masope is trying to help that along particularly with youth in the area.

"A lot of people only know about racquetball, but squash is a more technical game, you really have to pay attention to the bounce of the ball," Masope said. "It’s a more active sport, players lose more calories, and I find it a much more interesting game."

Ivy League schools now have squash teams, and Masope said it’s a good opportunity for youth players to get into college.

"We take our youth players to tournaments at Yale, Havard, Princeton," he said.

The event in Namibia was Masope’s first seniors event, before he played at the juniors level. He said the senior circuit represents a major step up in play.

"They bring a lot of experience from their years of player, it’s much more intense," he said. "It’s helped me a lot as a player to go against them, it’s one of those games where you learn something every day."

Masope will be representing Botswana in the World Team Championship in France in June. He will be training with Walker, who lives in Baltimore.

He also said his future goals include starting a program to bring squash to more underprivileged children.