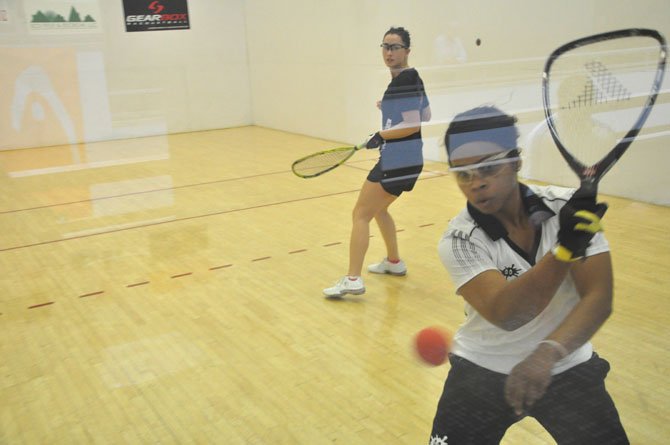 Damonique Davis hits a rebound shot during her match with Brandi Jacobson Prentice at Worldgate Sport and Health Friday, May 4, part of the Women’s Professional Racquetball Tour’s event. Photo by Alex McVeigh.

Herndon — Worldgate Sport and Health hosted more than 20 of the world’s top-ranked professional racquetball players last weekend, welcoming the Women’s Professional Racquetball Tour for the second year in a row.

Worldgate served as home court for one player in the tournament, T.J. Baumbaugh, the world’s 11th ranked player. A Reston native and staff member of the Regency Sport and Health club in McLean, Baumbaugh helped raise finds and sponsorships to bring the event to Herndon.

"The racquetball players here wanted the ladies to come play at our club," she said. "And it’s fun for me because I can sleep in my own bed. We’re usually all over the place, so it’s nice to have family and friends come and watch."

Rex Deitz, racquetball director at Worldgate Sport and Health, said the gym was happy to host the tournament.

"We’ve hosted some small events before, but this is a big event, and we love hosting it," he said. "We’re limited to playing on four courts, but the staff here and the tour have made it a lot easier." 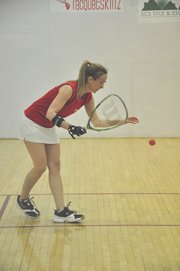 PLAYERS IN THE TOURNAMENT were able to stay at the Worldgate Marriott, which is attached to Sport and Health, and many said they enjoyed the convenience.

"It’s a great venue, and we’ve been able to make the short walk from the hotel to the gym," said Laura Brandt. "This entire plaza has been a fun place to be around."

Baumbaugh has been a professional for more than five years, and while she played almost any sport she could growing up, she turned to competitive racquetball while in college.

"I love playing on the tour, it gives me a competitive outlet, but you also build a lot of friendships," she said. "My goal is always to improve with every game, and I still learn every time I play. Even when I lose, even though I really don’t like it, I still learn something."

In addition to the United States, players come from Canada, Chile, Columbia and Mexico. Gigi Rock, tour commissioner, says that the women who find themselves playing on the court during every event become very close while traveling around the world.

"The players make friends and they become close, but as soon as they get on the court they’re all competitors," Rock said. "It’s a sport that’s growing. In the ’90s, a lot of gyms turned their courts into rooms for yoga or other classes."

Worldgate Sport and Health hosts a challenge court for racquetball players every Tuesday, Wednesday and Thursday nights and Deitz says they attract more than 20 players per night, as well as an audience.

"Interest has been growing at the club, and we’ve definitely been trying to extend our outreach to the youth," he said. "During our challenge counts, children who are attending a club here often gather around to watch, so we’d definitely like to capitalize on that interest."

Other featured events include the Pan American Games, the "Olympics equivalent," Rock said, which will be in Colombia in 2013.

More information on the Women’ Racquetball Tour can be found at www.wprotour.com.