Three local students honored for ‘service above self.’ 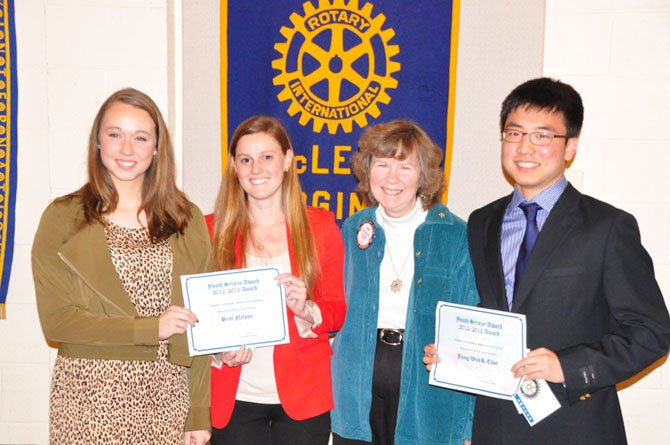 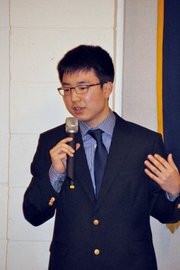 "James is the type of student who is always dedicated to excellence, he has a profound thirst for knowledge and a genuine love of learning. He’s also a highly principled individual, warm and caring and well loved by all who know him," said Jill Divine, a counselor at McLean. "He’s is the type of young person that’s going to accomplish great things in his life."

Choi has extensive volunteer experience around the world. He volunteers every weekend at the Milal Mission Association, where he works with children with mental disorders. He also volunteered as a translator at the Samsung Hospital in Korea for two summers.

"I think every person, regardless of origin, deserves the opportunity that other people get in order to succeed and contribute to the wellness of this society," Choi said. "As students who are able to receive a great education in the United States, I think it’s our duty to share our wealth and knowledge with others."

Choi will attend Duke University in the fall to major in a pre-med discipline as he hopes to go on to med school.

Pifer is involved with many local charities in a leadership capacity. She volunteers at Jill’s House, a center in Vienna that serves boys and girls ages six through 17 with intellectual disabilities, for the past four years.

She is a board member of Youth Inspire, an organization that provides support to children suffering from cancer. The group visits patients at Fairfax Inova Hospital, makes them cards and brings them other gifts.

"In the last few years, we’ve developed the concept of ‘Saxon Country’ where we’re trying to get the students to think of themselves not as individuals, but as members of a community. Becca has epitomized what that concept is meant to be from her first day at Langley," said Sonya Williams, Langley’s director of Student Services. "She’s an inspirational leader, full of energy, integrity, passion and does her best to try and make a difference."

Pifer is also co-chair of Entertainment Relay for Life, an overnight walk that benefits the American Cancer Society. She is working to help bring a Relay to McLean.

"We’re trying to get a huge event that Langley has never done before," she said. "And it’s one that can do a lot of good."

NELSON IS THE CO-LEADER of the Potomac School’s Community Service Club, organizing events, collecting donations, setting up fundraisers, finding projects for students and working with other organizations to hold events for Potomac students.

"She’s covered the full spectrum of services in our community and internationally as well," said Jason Dwyer, Nelson’s advisor at Potomac. "I’ve always been wrapped up wondering if there is such a thing as a truly altruistic act with no ulterior motive. With Britt, I’ve come to believe that there can be a completely altruistic act, I’ve seen plenty of them."

Nelson has spent several summers tutoring underprivileged elementary school students in math and English, participated in the Poder program, which is a big brother-big sister program that works with the Culmore Safe Youth Program.

"A lot of these kids would be falling behind in math or reading skills during the summer, so I really like being able to help them stay on track while also having some fun," she said. "We’re always trying to improve our curriculum and come up with fun ways to teach, and it’s fun to try and come up with new worksheets and activities."

Nelson said she hasn’t decided where she will attend college next year.