Cool temperatures and gray clouds didn’t stop the Saint Patrick’s Day crowd from hitting The Old Brogue for some fun and friendly celebration on Sunday. Deep-rooted in tradition, the Irish pub attracted hundreds of loyal fans—young, old and everyone in between—for a day full of food, drinks and friends.

“This is a Great Falls tradition,” said John Traynor of Potomac Mills, who has been coming to celebrate the day at the Irish pub for 25 years.

The Great Falls hot spot remained busy throughout the weekend, but saw its largest crowd on St. Patrick’s Day—its busiest day of the year next to Thanksgiving Eve. The doors to Katie’s Coffee opened at 7:30 a.m. for breakfast, while the rest of the pub opened at 10 a.m. It was an early start for many—some having stood in line since 6 a.m. to get seats when the pub opened four hours later.

The crowd reportedly started to get noticeably larger as early as 11 a.m., and by mid-afternoon, the line was well out the door, with the wait ranging from an hour-and-a-half to three hours at its peak. 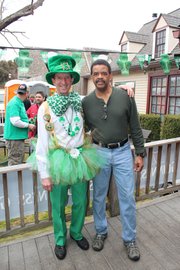 Inside, the bustling atmosphere was thriving with chatter, laughter and live music by Ted Garber.

“This is the best party in town,” Great Falls resident Rich Curd said. “The people are wonderful. The food is terrific. I’ve been coming here for 30 years.”

Reservations for lunch and dinner, the first seating being at 12:30 p.m. and the last at 7:30 p.m., were situated in the backroom. With not an empty seat in the house, attendees—many having made reservations up to two weeks in advance—enjoyed delicious meals and music performed by Pennywhistle with Barry and Donal Nelson.

“This is the most festive place in town,” said Pam Hess of Potomac Mills, adding her favorite part of being at The Old Brogue is “the happy people.”

Musician Ted Garber performs for pub-goers throughout the day on Sunday. Having known The Old Brogue since he was a boy, Garber has performed for St. Patrick's Day at the pub nearly a dozen times since 1996. "I've played in close to 4,000 shows and hundreds of venues," said Garber," and of all the place's I've played, this is my favorite."

Outfitted in green pants, yellow suspenders, a green tutu, an oversized hat and large bowtie with green clover leafs, restaurant owner Michael J. Kearney was dressed to fit the part as he mingled with pub-goers.

“They come back for the camaraderie and to celebrate the day,” said Kearny. “If these walls could talk—oh, the stories they would tell!”