When ‘Everyone is Irish’ at Town Center
Votes

When ‘Everyone is Irish’ at Town Center 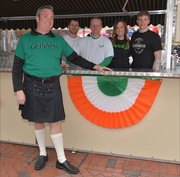 In the spirits of the day, from left, host and Clyde’s of Reston General Manager Hans Olson was properly dressed for a Celtic occasion as he poses with his bar tending associates Jake Corcoran, Jeffrey Turner, Allison Gagnon and Brady Winter.

With a decided nip in the air and the threat of rain, you could almost imagine yourself wandering the streets of Galway, Ireland—a fitting atmospheric backdrop for the third annual St. Patrick’s Day Celebration in Reston Town Center held on Saturday, March 16. It was a Pavilion Party, hosted once again by Clyde’s restaurant of Reston. 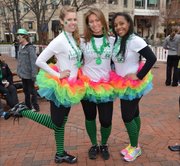 From left—Christy Oglevee, Emily Buckingham and Shannon Lewis came from as far away as Bristow, Va. These well-dressed ladies called themselves “Tears for Beers.” “We ran the 5k this morning—that’s the ‘tears’—so we could allow ourselves to have the beers!” laughed the trio. 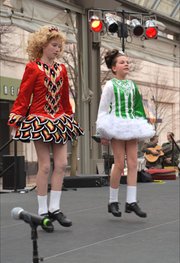 Dancing on air—Audrey Brown and Mary Kate Gareau, students at the McGrath Academy of Irish Dance, show off their Irish dance moves for the crowd in the Reston Pavilion.

There was plenty of corned beef and cabbage, shepherd’s pie and beef stew available, but it looked like sales of the traditional Irish beer, Guinness, were going strong. There might have been a bit of Bailey’s Irish Cream slipped into a few coffee cups as well—to ward off the chill, of course.

It was an all-day affair, starting at 10 a.m. and lasting until 11 p.m. The activities got off to a running start with the 5k Lucky Leprechaun fun run sponsored by Potomac River Running of Reston. Then it was time to hit the food and drink stalls and enjoy Irish entertainment, including some rousing fiddle playing, as well as traditional Irish tunes that had the crowds singing along. When they weren’t joining in with the dancers, the children had plenty to keep them busy with balloon castles and face painting.

The adults showed off their young-at-heart Irish attitudes with the “wearin’ of the green”—including a number of impressively large green hats, wigs and “Kiss Me, I’m Irish” t-shirts. “Everybody’s Irish on St. Patrick’s Day,” said one Reston reveler. He was probably right, since there were a variety of languages being spoken among those green-attired partygoers.

Host, and Clyde’s General Manager Hans Olson could be seen here, there and everywhere in the crowd, making sure his multitude of “guests” enjoyed the day. “It’s good fun,” said Olson. The “Irish” all seemed to agree.