“The uncertainty is the worst thing. How did we get into this? How do I survive and make sure my employees have a good standard of living? It’s mind-boggling,” Tony Coombs, owner of TC Associates—a Springfield-based cyber-security and professional consulting firm—said during an interview at his headquarters last week.

With 600 employees, Coombs said he was just starting to compete with larger companies for big federal contracts when the sequester loomed over the horizon. 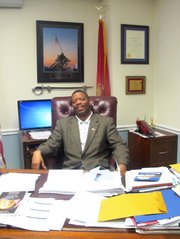 Tony Coombs, owner of TC Associates, in his Springfield office.

Born in the Bronx, where his Jamaican parents both worked menial jobs for little pay, Coombs decided to join the U.S. Marine Corps after high school as a way to get an education and get out of poverty. After his stint as a marine, he joined IBM in Tysons before starting his own company 11 years ago.

At the time, he had four children in high school, all headed to college, and a new house.

“You can imagine how my wife felt when I ripped the IBM logo off my chest. There goes the security,” he said, smiling. “But I wanted to be in a position to offer my children something I never had. I wanted them to go through college debt-free.”

Coombs said all of his children have college degrees and work in his company in one form or another.

“This is a family-connected place. There's not someone here who doesn't have some family connection. We encourage that and embrace that.”

But the sequester has caused serious setbacks to his company and employee morale.

“I started preparing myself and my company last November. We consolidated where we could, we froze bonuses and pay raises. We are now on a month-to-month lease,” Coombs said. The worst aspect for Coombs is disappointing his 600 employees. “We’ve had to rearrange our teams to use less people, and that’s the worst thing because everyone knows my employees always come first,” Coombs said.