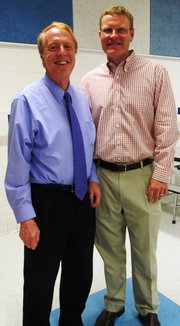 When Springfield business owner Tony Coombs felt the “mind-boggling impact” the $87 billion in budget cuts would have on his IT and cyber-security company, he began preparing his 600 employees for the fallout.

He froze bonuses and pay raises; he cut some employees’ hours by as much as 50 percent; he consolidated where he could and he began leasing his Springfield office building on a month-to-month basis.

“I wanted to do everything I could to avoid laying off employees,” Coombs said. “There's not someone here who doesn't have some family connection, and a feeling of family is something we’ve always encouraged and embraced.”

But the sequester caused serious setbacks to his company and employee morale, and after a few months of treading water, Coombs considered layoffs.

“We had to rearrange our teams to use less people,” Coombs said. “That’s the worst thing for me because everyone knows my employees always come first.”

Coombs, who participated in Congressional business roundtables to keep his company moving forward, learned about a government program adopted in several other states that help employers keep experienced workers on the payroll. 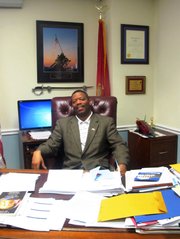 Tony Coombs, a decorated former marine, sits in the Springfield office of his cyber-security company. Coombs has 600 employees and operates satellite offices in Norfolk and San Diego.

CALLED WORK SHARING, more than two dozen states are now using the program—a kind of unemployment insurance in reverse—which comes with free federal dollars to keep workers in their jobs instead of supporting them after they’re laid off. Instead of getting a pink slip during an economic downturn, workers have an opportunity to stay on the job and receive unemployment benefits for the hours they lose.

And thanks to national employment policy experts such as David Balducchi of Arlington, work sharing is getting a new look from employers across the country and the state.

“With work sharing, an employee’s lost day of work doesn’t have to mean a lost day of pay,” Balducchi said. “The hours of all employees are reduced instead of sacking some employees. Employees receive partial unemployment benefits only for their lost hours of work. And employees keep working and don’t have to search for a new position in a bleak market.”

Balducchi has been crisscrossing the United States to educate lawmakers about work sharing and to help them enact legislation. In Washington State, for example, the program has paid dental technicians and plumbers at struggling companies. “The funds enable companies to hang on to experienced workers while they wait for the economy to improve,” Balducchi said.

State Senator George Barker (D-39), a proponent of work sharing, is urging fellow lawmakers to make Virginia the next state that adopts the legislation. 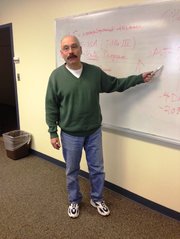 Barker, who said he is making work sharing legislation one of his top priorities for the 2014 General Assembly legislative session, worked with Balducchi and John Horejsi of SALT (Social Action Linking Together) to lobby other lawmakers to enact work sharing.

“Having been through the recession and recent slight increases in Virginia unemployment rates as federal sequestration takes effect, it is important that we give Virginia businesses all the tools we can to help them and their employees get through challenging times. This bill does that,” Barker said Tuesday.

The program, Barker said, is not a red state or blue state issue. In fact, the most recent states to pass some form of work sharing legislation this summer—Wisconsin and Ohio—are led by Republican governors.

“This is a bipartisan bill put forth by Republican Senator Bill Stanley from Franklin County and myself,” Barker said. “We have worked with the business community on this bill, including the Virginia Federation of Independent Businesses, the Virginia Chamber of Commerce, and Virginia Association of Manufacturers as well as with community organizations. We have addressed the questions and concerns raised by legislators.”

UNDER THE BILL proposed by Barker, the legislation would establish a shared work program that provides employers with the option of reducing the hours worked by employees, while permitting the employees whose hours are reduced to receive partial compensation for lost wages. Program participation requires Virginia Employment Commission approval of a plan, which must provide that the reduction in hours of work is in lieu of a layoff of an equivalent percentage of employees and that employees' fringe benefits cannot be reduced or eliminated during the plan.

“Having been through the recession and recent slight increases in Virginia unemployment rates as federal sequestration takes effect, it is important that we give Virginia businesses all the tools we can to help them and their employees get through challenging times. This bill does that.”

According to U.S. Department of Labor data, work sharing has saved 61,299 jobs in a combined 19 states in 2012. Some states, like Colorado and New Hampshire, saved less than 100 jobs, while California, Texas and Washington each kept between about 10,000 and 21,000 employed, according to a Justice Center report.

Balducchi said work share programs are gaining momentum with employers nationally because it gives them flexibility during an economic downturn. Instead of laying off highly-trained, experienced employees—which may save employers money in the short term—they have the flexibility to reduce hours and maintain a specialized workforce, which ultimately benefits employers in the long term.

For an employer like Coombs, who has invested significant time and money in training top-rated cyber-security employees, the program gives him and his employees some breathing room.

“If I have to lay off people, I’m not going to 7-11 and find the talent, training and security level my clients expect. … This business revolved around a qualified team of people,” Coombs said.

The Department of Workforce Development estimates work-share programs will save the unemployment reserve fund $4.9 million.

“We almost got it passed in 2013 and look forward to success next year,” Barker said, adding that he remains optimistic the bill will pass in 2014.

“We will rally the troops next year,” Horejsi said. “We are energized by the prospects for success for this commonsense legislation.”