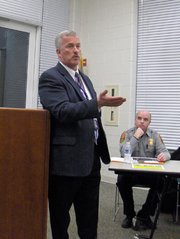 Keeping students safe is Jim McLain’s job. After retiring as a Fairfax County police commander in 2001, he joined Fairfax County Public Schools; and for 12 years now, he’s been one of its two security coordinators.

McLain said FCPS safety and security in the schools only works because of each school community. And it’s a mammoth task because it deals with more than 181,000 students and 24,000 full-time employees in nearly 200 buildings, plus 900 modular units and 1,600 buses.

“We have inspectors dealing with all aspects of safety, even on playgrounds,” he said. “We have a proprietary uniformed force in our schools during the day because SROs are at every one of our high schools and middle schools, plus two police officers at the secondary schools.”

McLain said a county police commander works in the office next to him and there’s also a security director, assistant and staff there. “It’s a wonderful, boots-on-the-ground operation,” he said.

Regarding building safety, he said every elementary and middle school has electronic door access and “we’re now piloting it in the high schools.” Furthermore, many schools are using the automated visitor-management system and can check people against a list of registered sex offenders.

“We also have good, outside lighting around the schools,” said McLain. “If you think a school needs more lighting, call me. And we have an elaborate alarm system. We do as much as we can, with the resources we have, to keep the schools safe.”

He said every school has an emergency plan and it’s reviewed and updated by his officers each year. “We ask questions such as, ‘Is there a better place to be during an emergency? Should people shelter in place or go elsewhere?’” said McLain.

They also discuss securing the building, which McLain said was a new concept for him. “As young officers, when we were chasing a bad guy on the street, the last thing that came into our minds was the schools,” he said. “But now we automatically think about them because we don’t want [a criminal] trying to seek shelter in one of our schools and making the situation even more dangerous.”

McLain noted that every school has mandatory drills for fires, tornadoes and lockdowns. “In an emergency, you always resort to your training,” he said. “We’ve actually had children evacuate a school on fire successfully — and not know it was on fire — because they were just doing what they always did.”

Adults learn these things, too, he said. “We put the school crisis-management team through exercises and scenarios,” said McLain. “And we critique what they’ve done and they learn how to improve it.”

In every classroom, there’s a guide telling teachers what to do in case of emergencies. “There’s also an orange vest which each teacher will wear,” said McLain. “People with yellow vests and two-way radios are who the teachers are reporting to; so when fire and police personnel arrive, they know who’s who.”

Bus drivers and custodial staff also help, and McLain said all this advance planning is critically important. “You have to have the training, plus the best information to and from us, to better control and mitigate chaos,” he said.

His office hears police calls and, said McLain, “If we hear a police call go out near a school, we’re there. And every school has a public-safety radio so they can call us, even if they lose their other communications. They also have two-way radios so they can talk with their staffs.”

He said cameras and security equipment help provide safety, but people are better. “Intervention and prevention are key,” said McLain. “Call us if you hear or see anything suspicious,” he said. “We can’t help you if we don’t know what’s happening.”

With “targeted violence,” said McLain, “People exhibit specific behaviors. If you report it, we can prevent it. We’ve established a tip line, 703-658-3636; it’s anonymous and I have an entire staff that answers it any time of day. We’re all in this together; the value of the empowerment of you all being involved is priceless.”

A resident asked him if there are any plans to put a chain lock or bar on classroom doors to keep classrooms safe. “No, it’s a fire-code issue,” answered McLain. “And if you lock out the bad guy, you also lock out the good guy [trying to help].”

McLain advised him to have her ask the school about it so either school personnel or his staff could train her. “There’s still that gap,” he acknowledged. “But if the other teachers know what to do, the substitutes can follow their lead. And if you see a school not following adequate security procedures, call us.”

Police Capt. Ed O’Carroll, commander of the Sully District Station, said another way to help keep children safe is by participating in Neighborhood Watch and having parents look out for their neighbors’ latchkey children. “So get to know your neighbors and be mindful of suspicious people, cars and packages,” he told the audience. “And have the confidence to call us if you think something is wrong.”