On the first day of spring, the Hybla Valley Elementary School community celebrated with an international festival at the school. All seven continents were feted. A Mariachi band, an Irish dance group along with student and family cultural performances drew crowds into the gym, the World Stage.

In the African wing, art and mudcloth and bead trading were displayed. Art depicting Australia hung in the hallway by the kindergarten classes. In the 5th grade hallway, Antarctica was also featured in art and could be viewed while at the other end near Asia, henna tattoos were being applied to the students.

The South American exhibit featured a lotteria game in the café, pottery-making in the art room and more art displays. A labyrinth, a cultural theatre, a German band, bagpiper and drummer along with mini language lessons were a few of the highlights from the European exhibit.

The evening ended with the bagpiper Colin Agnew and drummer Beth Morga leading the festival participants in a parade throughout the hallways and out to the front entrance of the school on Lockheed Boulevard.

Students and their families fill the gym to watch the performance of the Irish dancers on the World Stage.

Students were given passports to have stamped as they toured the different exhibits and performances during the spring festival.

Students representing Central and South American countries await their turn to appear on stage during the evening performance.

Santiago Estela and Carlo Castro rehearse the Salsa before their performance. 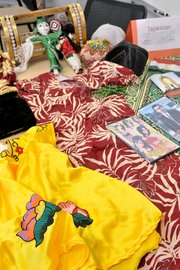 Tajikistan was on display in the Asian exhibit. 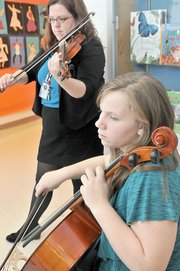 Bonnie Calhoun playing the cello accompanies Mary Wilkerson in melodies from around the world.

Bagpiper Colin Agnew and drummer Beth Morga of the Northern Virginia Firefighters Emerald Pipes and Drums leads the parade of students and their families through the school at the conclusion of the festival on Thursday evening. 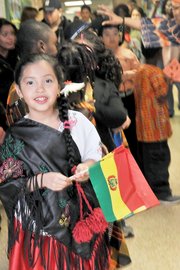