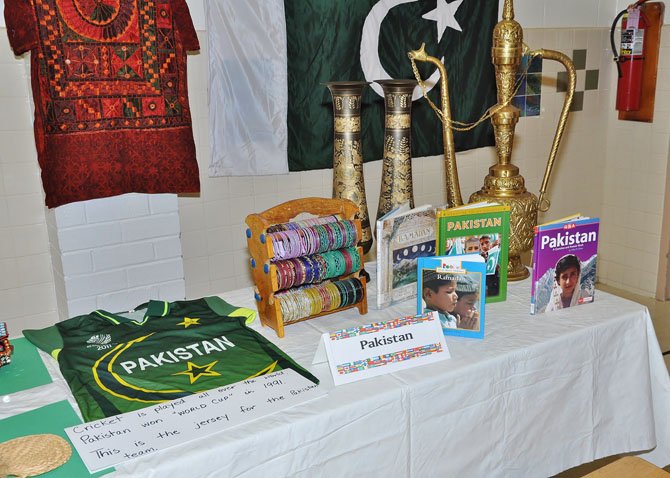 A table display for Pakistan included reference books on the culture, a World Cup jersey, brightly colored jewelry and other collectibles and decorations. Clothing and the flag of Pakistan adorned the wall behind. Veronica Bruno

By By Veronica Bruno 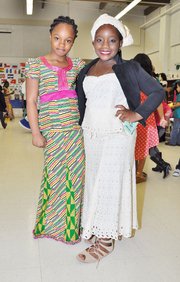 Students pose in heritage costumes during International Night at Hybla Valley Elementary. The evening celebrated many cultures of the school community.

Mount Vernon — Hybla Valley Elementary held an International Night on Thursday, April 3. Student-made decorations were used by the physical education, art and music teachers to transform the hallways into several Halls of Nations. Even the ceiling was lined with kites inspired by international cultures.

School parents built an archway leading to the gymnasium of blue balloons with flags from nations around the world. The international influence was everywhere: flags covered the walls of the cafeteria and tables were lined up along the room with cultural showcases that included clothes, décor, jewelry, reference books and more from around the world. Many of the parents brought the artifacts directly from home. Among the nations represented were Japan, Sierra Leon, Greece, Ethiopia, the Honduras, El Salvador, Mexico and China. A Chinese dragon led the parade of nations through the school hallways.

Festivities included games, dances, mud prints, a labyrinth, pottery making and music from various cultures. Tinikling, a dance from the Philippines done with bamboo poles, was a particular highlight. Everything displayed and showcased was a product of the students and parents. 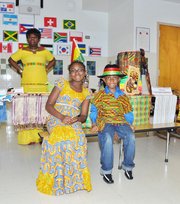 Two students represent the nation of Ghana at their table which displayed heritage items from the country. In the background was their mother. Flags from several nations also lined the walls.