Peter Hwang is only in the seventh grade, but he recently won the Veterans of Foreign Wars (VFW) writing contest. He wrote an essay answering the question, “What would you say to the Founding Fathers?” 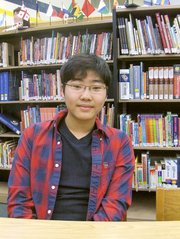 “Originally, I did it for extra credit in my history class,” he said. “But once I started writing, I got into it. My teacher asked the same thing in fifth grade, for critical thinking, so I already had a basis for my essay.”

“I said I’d tell the Founding Fathers how the Constitution they wrote has lasted through generations of society and still influences people,” continued Peter. “I’d also want to tell them that, except for adding amendments, it was unchanged and timeless.”

He lives in Fairfax’s Mosby Woods community, but attends Rocky Run Middle School because he’s in its AP program. He maintains nearly a straight-A average.

Peter also noted in his essay that there had been a Civil War—“not because of the Constitution, but because of how some people interpreted it. I said its goals of freedom, life, liberty and the pursuit of happiness had been achieved in America in our lifetime.”

“I said I’d tell the Founding Fathers how the Constitution they wrote has lasted through generations of society and still influences people.”

He also mentioned the current gun problem in the U.S. and the debate about Second Amendment rights. “I said, ‘As events happen, some people’s thoughts about this amendment have started to change,’” said Peter. “But the idea of the right to bear arms and the Second Amendment, itself, still stand strong.”

His essay was 600 words and the first draft took him an hour to write. “My mom gave me some pointers and told me to elaborate on my ideas,” said Peter. “So overall, it took seven hours total.”

He said he didn’t think about winning the contest until his teacher, Maggie Brown, announced to the class that he’d won. “I was really shocked,” said Peter, 13. “I thought I did a good job, but didn’t think it would be winning quality.”

He competed against other middle-school students from throughout Fairfax County. For his prize, he received a certificate and a check for $30—“which I thought was awesome,” said Peter. “And Mr. [Jamie] Sawatsky, who teaches the Model U.N. Club after school, gave me a Barnes & Noble gift card.” Peter planned to use the gift card on fantasy and science fiction books and put the $30 in his savings account.

In his spare time, he likes playing video games and writing fantasy and science fiction stories. He hopes to eventually attend Thomas Jefferson High School; if not, he’ll go to Fairfax High. For a career, he’d like to be either a doctor or work in the computer field.

Before writing his essay, said Peter, “I didn’t know any of the amendments but the first one, but I learned through my research. I also learned a little more about how the government works.”