Tell Your Story with ‘Better Said Than Done’
Votes

Tell Your Story with ‘Better Said Than Done’

Storytellers in Northern Virginia troupe “Better Said Than Done” come from all over to tell their stories. 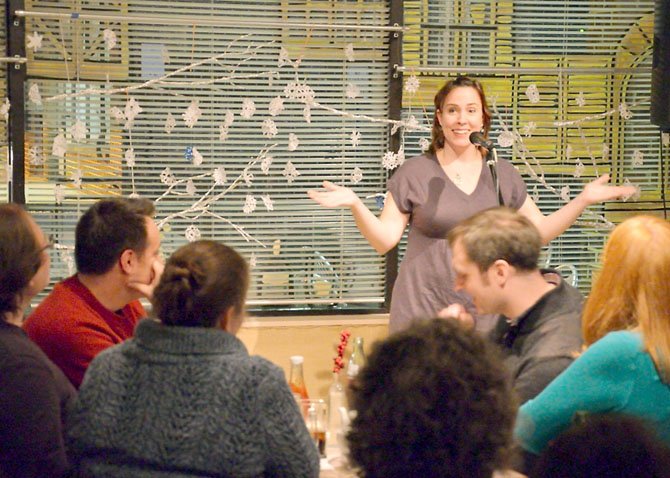 Jessica Piscitelli, CEO and owner of the “Better Said Than Done” troupe, performs at the Epicure Café. Bart Robinson

Started in 2011 by Jessica Piscitelli, “Better Said Than Done,” a professional storytelling troupe, has gone from strength to strength over the past two years with a pool of about 45 talented storytellers. But who knew people would be interested in coming out to listen to what they have to say?

“It’s almost like therapy or going to church, there’s a sense of sharing something.”

—Jessica Piscitelli, CEO and owner of “Better Said Than Done”

“It’s almost like therapy or going to church,” said Piscitelli, “there’s a sense of sharing something.” All the stories told are true and personal, sometimes funny, sometimes sad, sometimes unbelievable and sometimes just plain silly. “Sometimes the audience sticks around and asks questions, some people ask if the story was true while others ask for advice,” said Piscitelli.

Reston resident David Supley Foxworth performs one of his stories.

The storytellers perform monthly at the Epicure Café on Lee Highway in Fairfax, while other events have been held at Jammin’ Java, Franklin Park Performing Arts Center and the Reston Walker Nature Education Center. The two-year anniversary celebration contest, scheduled for May 25, is set to be at The Auld Shebeen in Fairfax City. The contest will feature stories from the top 10 storytellers in Virginia, as voted upon by a panel of judges. But on the night, it will be the audience that will decide who will be the first place winner to receive $300, second place winner to receive $200, and the third place winner to win $100.

Speaking at the two-year celebration event will be Reston resident David Supley Foxworth. “I'd gone to a few storytelling shows over the last three years, and it reawakened my childhood desire to be a stand-up comedian. The first show was frightening—and thrilling! I'm hooked on the writing and performing now, and I've got my fourth performance coming up in May,” said Foxworth.

“The first story ever told by Foxworth was chosen to be in the top 10 list,” said Piscitelli. So, he will be performing in the two-year anniversary contest where the theme will be “The Art of War: Competing, Fighting, and Winning.”

Every show has a theme and previous themes have included “Where the Wild Things Are,” “Traveling Man” and “Nerds.” In addition to the stories being told by the experienced storytellers, audience members are also encouraged to tell stories. Scared to do this? Well, the organization also offers workshops that are designed to help storytellers of all levels to learn how to tell an interesting story. In fact, Foxworth is a graduate of a “Better Said Than Done” storytelling workshop. “I attended a ‘Better Said Than Done’ workshop to prepare for my first storytelling performance. The workshop, and the rehearsal that Jessica runs before each show, are great opportunities to practice and get feedback from a supportive group of fellow performers. I got a lot of fantastic advice to craft my first story,” said Foxworth.

Members of the “Better Said Than Done” troupe perform and have fun at the Epicure Café.

“People turn up to the workshops that I have never seen before,” said Piscitelli. “A lot of people have no idea what to expect and don’t know why they actually went,” she said.

Asked where the audience for a storytelling event comes from, Piscitelli explains that people Google storytelling and when they come out to an event they become part of a community of regulars who just keep coming back.

Details of the “Better Said Than Done” troupe can be found at www.bettersaidthandone.com.