‘Signs of the Tines’
Votes

‘Signs of the Tines’ 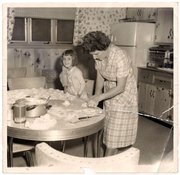 Joan Porte with her mom in their kitchen.

Most people look to astrology when seeking a perfect romantic mate not the perfect meal. However, Arlington astrologer and businesswoman Joan Porte explores the connection between food and astrology in her 295-page cookbook called “Sign of the Tines: The Ultimate Astrological Cookbook.”

"I looked around and saw therer were cookbooks on how to find your mate by using astrology or how to cook for your husband if has a certain astrological sign. But no astrological cookbooks. So I decided to do one," she said.

Its title, “Sign of the Tines,” is taken from the tines on a fork and signs as in astrological signs. It can be purchased at http://www.signsofthetines.com or other locations where books are sold.

Porte spent nearly eight months collecting and organizing more than 120 recipes from friends and family mentioned in the book during the summers she spent in Maine.

"I'm trying to make it [astrology] fun and accessible for people. If you don't have that much interest in astrology you can still have fun cooking and reading through the book," she said.

She hopes “Signs of the Tines” will help readers see that astrology is not as mysterious as some have made it out to be.

"And I think people get confused when they see the chart — it looks spooky and distant — I want to make it alive and ‘down to Earth’ for people," she said.

The chapters are organized by zodiac sign. Each chapter includes appetizer, soup, pasta, veggies and fruit, meat and fish and dessert dishes catering to each zodiac sign's preferences.

The Scorpio chapter contains a recipe for a Spanish dessert (Calabaza en Tacha). It is a pumpkin dessert served on the Day of the Dead (Nov. 1) that refers to the Scorpio's being the sign of "death and re-birth."

For the section on Cancers, she put in a lot of "homey" recipes and a lot of recipes from her friend’s moms because Cancer's are the "comforters or mothers." Since Sagittarius are world travelers, she put in a recipe from her French Canadian friend and she also put in a Korean recipe and more adventurous recipes.

Some of Porte’s favorite recipes include a fun recipe for an Italian stew, chocolate cloud cookies and her mom’s Macaroni Pie and her friend Arlene Weinstock’s (a Virgo and vegetarian) mother’s recipe for “Rose Weinstock’s Mock Chopped Liver.”

The book also contains foods that would be unappealing to each sign.

For instance, Leo would not like any sloppy or gooey foods because they have to maintain their dignity at all times. And Taurus doesn't like anything healthy in front of them.

Besides the Sun Signs everyone typically associates with astrology, she also includes each zodiac sign's Rising Sign such as Libra Rising.

According to Porte, it is actually the Rising Sign that shows one’s personality to the world and not the Sun Sign (such as Scorpio).

"What is more important is your Rising Sign … That’s your personality. People say you don't act like a Scorpio (Sun Sign) well that's because Scorpio is your inner energy. But it's not how you show the world you. That's your Rising Sign," she said.

She also includes a list of famous people with that Sun Sign in each of the chapters. According to Porte, both Grace Kelly and Jackie Onassis had Scorpio rising — and they hid their private lives — they had that Scorpio need for secrets.

Currently, Porte is in the working stages of co-writing another astrology book with her astrology teacher Adam Gainsburg.

In her spare time between running her astrology business and travel agency, she belongs to several book clubs and is an avid reader of history books. One of her favorite authors is David McCullough.

Porte has a studied astrology on her own for five years and she also completed the Soulsign Astrology course and taken private lessons from Gainsburg of Soulsign.