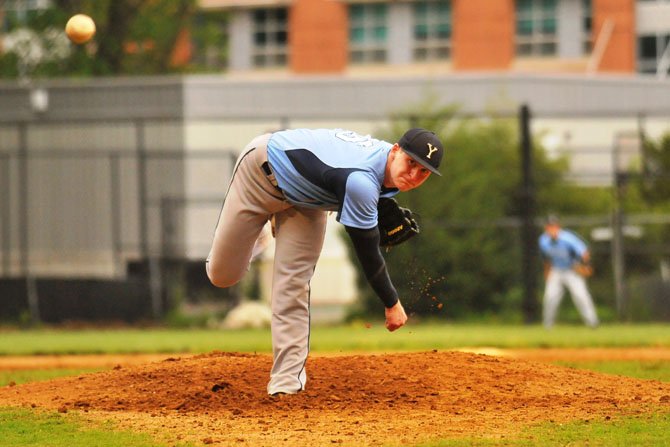 Yorktown pitcher John Yoest threw a complete game in his final high school start on May 24, allowing one run while striking out 11 in seven innings. Photo by Louise Krafft.

Arlington — Yorktown senior pitcher John Yoest whipped his glove around and snagged a comebacker in the top of the seventh inning before tossing to first base for the final out.

After a dazzling night on the mound, Yoest showed off his reflexes before heading to the dugout. Unfortunately for the Patriots, the performance of Stone Bridge pitcher Jacob Bukauskas rendered Yoest’s flash of leather a stylish end to his high school career.

Yoest tossed a complete game against Stone Bridge in the opening round of the Northern Region tournament, allowing one run on six hits. He walked two, hit a batter and struck out 11. It wasn’t enough, however, as Bukauskas hurled a two-hit shutout and the Bulldogs beat the Patriots 1-0 on May 24 at Greenbrier Park.

“It’s kind of tough to lose a game like that,” Yoest said. “But there will be a lot of dry eyes in the dugout only because of the success we’ve had not just as a baseball team, but as a baseball family.”

Yoest, a first-team all-Northern Region selection, got off to a strong start, striking out the side in the top of the first inning. He matched his opponent zero for zero until the fifth inning, when Stone Bridge center fielder Matt Hough delivered a two-out RBI single for the game’s only run.

“It’s kind of tough to lose a game like that. But there will be a lot of dry eyes in the dugout only because of the success we’ve had not just as a baseball team, but as a baseball family.”

“I didn’t approach this game any differently based upon who they threw,” Yoest said. “I just came out there expecting to throw my game, work with [catcher] Jake [Marshall] and throw strikes. It’s the same mentality I’ve had all season and I was blessed to pitch side by side with a kid of similar talent.”

Bukauskas, the Northern Region Pitcher of the Year as a sophomore, walked five and struck out nine. He allowed two hits --- a pop fly the wind helped fall for a double, and a single on a hit-and-run that would have otherwise been a routine out. Yorktown loaded the bases in the third, but Bukauskas got out of trouble with a strikeout. The Patriots had runners at first and third with one out in the fifth, and Bukauskas induced an inning-ending 6-4-3 double play.

Bukauskas finished with 89 pitches, 57 for strikes. He threw a first-pitch strike to 20 of the 28 batters he faced.

“It was not easy, I’ll tell you that,” Yorktown shortstop Daniel Overbeek said of facing Bukauskas. “We haven’t faced much like that this season.”

Yorktown ended the season with a 17-6 record. The Patriots finished atop the National District standings in the regular season, compiling a 14-0 record. They finished runner-up in the district tournament. Head coach Mike Ruck said he expects sophomore pitcher Graeme Fineman, freshman center fielder Joe DiConsiglio and sophomore catcher James Levenberg to be key contributors on next year’s team. Junior designated hitter/first baseman Teddy Schroeder will return after being selected to the all-region second team this year.

“I’m very proud of the guys [and] how they ran the table in the district,” Ruck said, “and to do that is so impressive because your district knows you so well, know your tendencies, know your players, so to run the table is quite an accomplishment.”