Getting Children to Give Back
Votes

Getting Children to Give Back

Touching Heart aims to train next generation of compassionate leaders. 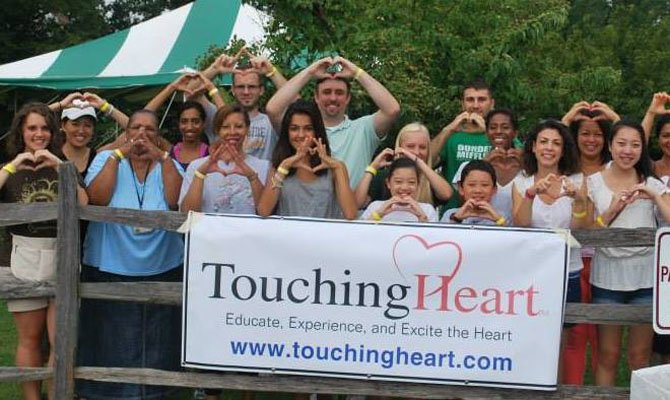 Touching Heart, a Herndon-based nonprofit, aims to give children the chance to give back, which includes running their own fundraisers. Photo Contributed

Herndon — As her birthday approached several years ago, Taylor Yi of Herndon realized she wasn’t that excited about another year of presents from her friends.

“She told me ‘I have a lot of stuff, and I don’t think I need anymore,’ and decided that she would get her friends to make donations to those in need instead of giving her a present,” said Helen Yi, Taylor’s mother. “Everyone really got behind that idea, and it led to our Wishlist program.”

Residents of a village in Mozambique with an oxen plow which was purchased by funds raised by Touching Heart, a Herndon based nonprofit that gives children the chance to give back.

“We got together a group of girls for a presentation and told them about the many ways they can make an impact, locally, across the country and around the world,” Helen Yi said. “Once they started learning how blessed they were to have simple things like clean water, we started a real connection.”

Soon Touching Heart launched their Kids On A Mission program, where they work with children and teach them how to organize, plan, market and execute their own fundraisers and other events.

CHILDREN ARE PAIRED with an adult mentor, but the responsibility for their event or cause is put squarely on their shoulders.

Kids On A Mission projects have supported everything from helping Kenyan orphanage purchase water lemonade stand to funding a self-sufficient chicken farm in Mozambique.

“Of course, raising money is a big part of what we do, but deeper than that, we want the children to learn the joy of giving,” Helen Yi said. “When they recognize the importance of charity at a young age, that’s how you get a generation of compassionate leaders.”

Older students, ages 12 to 13, are now hosting their own workshops for children ages 6 to 7.

“The older children get a chance to make an impact on the younger ones, many of whom see the older children as their role models,” said Marina Amat, a board member. “The younger children can really get a sense of what they have and the need to help others from someone they look up to and admire.”

One such workshop involved the older children discussing bullying with the younger children, teaching them how to recognize the warning signs, how to respond to a bully, and what to do if they see bullying.

“The older children used things like acting and role playing to show the younger kids the realities of bullying, and they really took to it,” Amat said. “Seeing the children respond to the simulations, how they would stick up for someone they thought was being bullies and learned how to compassionately respond was very moving to watch.”

That attitude of positivity is what brought Touching Heart their new program director.

“I heard about them when I moved to the area, and at a time when the news is filled with bullying and violence, Touching Heart is making a concerted effort to show children the benefits of compassion and love,” said Cacky Dias, who became their program director at the end of the summer. “We’ve got schools that work hard on molding children’s minds, but Touching Heart works on their heart.”

TOUCHING HEART has several annual events, including a summer carnival party for local foster children, a holiday outreach program to homeless shelters and an annual golf tournament that serves as their primary fundraiser.

Going forward, Amat says the challenge facing Touching Heart is continuing to reinforce the principles that the students learn from the organization.

“The first step is to help children find their voice and grow as leaders, so as they get older they can take on major leadership roles,” she said. “The challenge is going to be keeping them inspired through the years as more things, like studies, sports and other activities, begin to compete for their time, but hopefully we’ve laid a foundation that will get them to always make the time.”

Helen Yi said Touching Heart is currently working with the Fairfax County School Board to develop a service-based curriculum that could be used in county schools, either as a classroom initiative or an after-school activity.

The next fundraising golf tournament for Touching Heart will be Thursday, May 8 at Lansdowne Resort. More information is available at www.touchingheart.com.