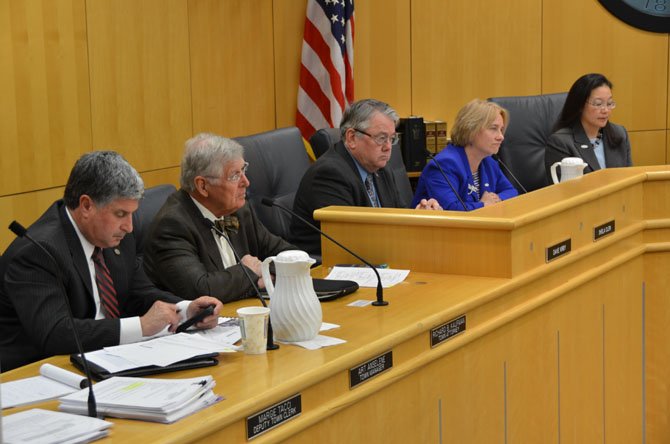 Members of the Herndon Town Council voted on Tuesday, Nov. 12, to approve the design of gateway signs that will be set up around the entrances to the town of Herndon. Members of the public were invited to attend the Town Council meeting and voice their opinions during the public hearing. "When the signs are installed it is yet to be determined," said Bryce Perry, the planner and deputy zoning administrator at Town of Herndon.

"The process of obtaining these signs was decades in the making," said Perry. "The need to market the town and enhance the gateway to the town are in the 2030 vision. We knew this was a big part of that." The Town of Herndon currently has two older wooden gateway signs that have been in use since 1979.

A sign review advisory committee comprising six residents of the town of Herndon was formed to help evaluate designs for the new gateway signs. Town councilmember Melissa Jonas was chair of this committee.

TWO DESIGNS were developed, a primary design and a design when site constraints limit size. "We are lucky to have medians in most of the locations for the gateways signs and there is less competition visually," said Perry. "Because the medians had sight constraints, we decided to go with vertical oriented signs."

The estimated costs are between $20,000 to $40,000 per sign, though Town staff say they believe it would be toward the lower end of the range.

"We really want to establish the Town of Herndon as a locality, to identify where the Town of Herndon starts," said town council member Grace Wolf. "A lot of people do not know where the town borders are." Both Wolf and Jonas agree public response to the sign designs has been mostly positive. "Some question how much it would cost, but I ask how much it would cost to not continue investing in our infrastructure," said Herndon resident Barbara Glakas. "This design speaks louder of our history."

All the lettering on the signs will be vertical, without a branding or logo font. The design calls for traditional materials, real stone venire, and smooth concrete. Absent from the signs’ design is the town’s seal. "It simplifies the message of the sign. With a sign of this size, you would not be able to see the intricacies of the town seal," said Perry. Herndon Town council member Dave Kirby said during the hearing as much as he respected the town seal, space limitations would not make it a good location.

One of the next steps will be for the office of the Herndon Town Manager to obtain construction bids for this project. "Because we are at the doorstep of Dulles and with the arrival of the Metro Silver Line, it will be a welcoming sign whenever people enter in and out of the town," said councilmember Jonas. "There will be a sense of pride for people of the Town of Herndon to see these gateway signs."

To learn more about Town of Herndon government and meetings, visit www.herndon-va.gov/Content/Government.