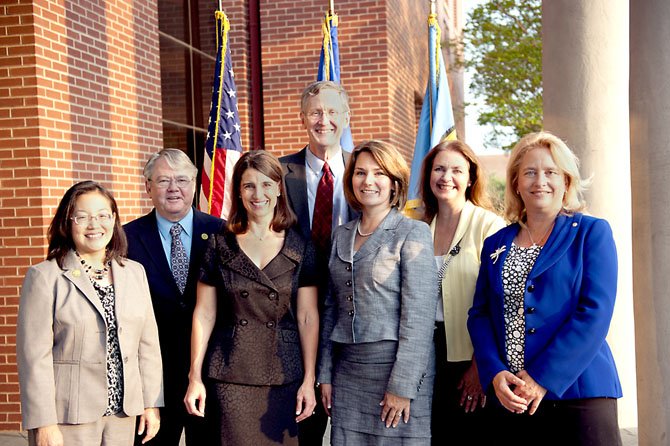 Herndon — The 2012-14 Herndon Town Council, as well as newly elected Mayor Lisa Merkel were sworn in at the Herndon Municipal Center Thursday, June 21. Connie Hutchinson, Sheila Olem and Grace Wolf are returning members, joined by Dave Kirby and Charlie Waddell who return from previous terms on the council and Melissa Jonas, who previously served on the town’s Planning Commission.

"The campaigns are over, and that’s the easy part. Now comes the governing, which is the tough job," said Del. Tom Rust (R-86), who spoke at the event, and has previously served as mayor. "The decisions this council will make over the next few years will shape the future of this community. They will affect every single person who lives, works and visits here."

Over the next two years, the council will continue the work of the previous council when it comes to planning for the two major components of Herndon’s future, its downtown and the proposed Metrorail station. 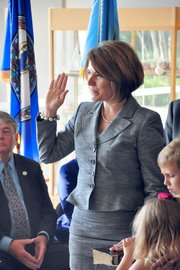 Lisa Merkel is sworn in as Mayor of Herndon June 21 at the Herndon Municipal Center.

"As a self-governed town, we control our destiny and have the power to set the stage for what it means to be a 21st century hometown. Your Mayor and council are passionate about maintaining Herndon’s small-town character while capitalizing on the many opportunities before us here in the Dulles corridor," Merkel said. "Whether you’re raising your family, starting your business, or enjoying retirement, Herndon has something for everyone and we want the world to know."

Merkel called Metro’s arrival "coming full circle as a rail town" citing the town’s history as a rail stop in the 1800s and emphasizing its importance to Herndon’s future.

"The eventual redevelopment around the Herndon station will attract world-class businesses to marquee spaces around the toll road, something we cannot currently offer," she said. "Of course, Metro is more than just a train, we need to be able to get to and from Metro by car, bus, or on our feet."

She said the town’s future will be one that will welcome "innovators, risk takers and history seekers."

Merkel also praised the diverse talents each member will bring to the council, from their involvement in the town’s historical initiatives, to extensive knowledge of traffic studies and local neighborhoods.

Each councilmember, surrounded by family, took the oath of office individually. It was administered by Town Clerk Viki Wellershaus. The new council will officially take office Sunday, July 1, and will begin their work sessions the following Tuesday, July 3.

More information, including work session and public hearing agendas, can be found at www.herndon-va.gov.