"Way to go! You are doing great!" cheered Wolf Gottschalk as participants in the 2013 Herndon Turkey Trot ran by Ferndale Avenue near the Herndon Community Center. Despite cool weather that remained below 40 degrees, spirits were upbeat for volunteers and race participants. "The key thing about the race is how many families and kids participate," said Cindy Roeder, director at Herndon Parks and Recreation. "It [the Turkey Trot] has grown to be a community race with a focus on families participating. This is the largest registration we have yet had for this race." 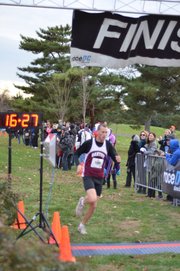 Matt Kroetch from Chantilly crosses the finish line. Kroetch was the 5K overall winner with a time of 16 minutes and 27 seconds.

Outside Herndon Community Center, people warmed up in the late afternoon on Saturday, Nov. 23 for the 5K race. "If you see someone go down in front of you, they are not a speed bump, help them up," said Gottschalk. He gave the final instructions to participants in this year’s Turkey Trot. An employee of Fitness Image Results, Gottschalk led warm up exercises for race participants.

"For us this is great to see so many people coming out with their friends and get a bit of exercise. It is wonderful to see so many local people from the area. We have over 1,000 runners in this year’s race," said Abby Kimble, Herndon Park and Recreation Marketing Specialist. Kimble noted the community center was participating in Nike’s Reuse-a-Shoe Recycling Program, which concludes at the end of November. All athletic shoes collected go toward making basketball courts, track fields, playgrounds, floor tiles, new shoes and apparel.

"This is my second time participating in this race. It is fun, the race is a bit cross country with some rolling hills," said Arlington resident Matt Klark. "It was a well run race." Maddie Humphrey, a resident of Reston and PE teacher at Floris Elementary was participating in the race for the first time and was cheered on by her friend Kevin Mallon. "This was more a cross country race than I expected," said Humphrey. "I really enjoyed it." "I had a good run," said Susanna Sullivan, a resident of Falls Church. "I ran about 20 seconds faster than last year."

The registration fee to race was $15 and a can of food which was given to the non-profit charity LINK, Inc. A turkey and all the trimmings were given to the overall male and female winners. "I have done this race every year repeatedly, so I advertised it to my friends," said Sterling resident Amy Carroll who convinced some friends and fellow members of the Reston YMCA to join in this year’s Herndon Turkey Trot. 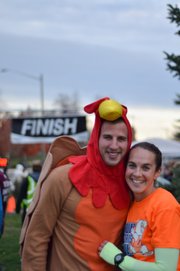 Maddie Humphrey resident of Reston and PE teacher at Floris Elementary participated in the 5K race and was cheered on by her friend Kevin Mallon.

This is the second year students from the 4th through 6th grade at Dranesville Elementary, called the Dragon Runners, participated in the Herndon Turkey Trot. "They practice twice a week at our school," said Dranesville Elementary Principal Kathy Manoatl. Herndon Elementary and Hutchison Elementary also had groups of students participating in the 5K race. Hutchison Elementary teachers Matt Lear and Robin Schuh were leading a running club of 4th through 6th grade students. "This is our second year participating in this race," said Lear. "We started the running club in the fall of 2012, and our goal is to finish. With most of the group, it is our first time running this far."

When participants completed running, they returned to the Herndon Community Center gym where they could obtain refreshments and snacks. A raffle was conducted, and prizes were awarded to the race participants based on age and gender. Great Harvest Bread Company brought muffins and bread, and restaurant owner Jimmy Cirrito, owner of Jimmy’s Tavern served bowls of baked potato soup. "We have been coming to the Herndon Turkey Trot since 1997," said Cirrito. This November Jimmy’s Tavern was recognized as King of the Wings by Northern Virginia Magazine, a title the restaurant has won for three consecutive years.

To read more about the Turkey Trot visit http://www.herndon-va.gov/Content/Parks_rec/SpecialEvents/TurkeyTrot/default.aspx.