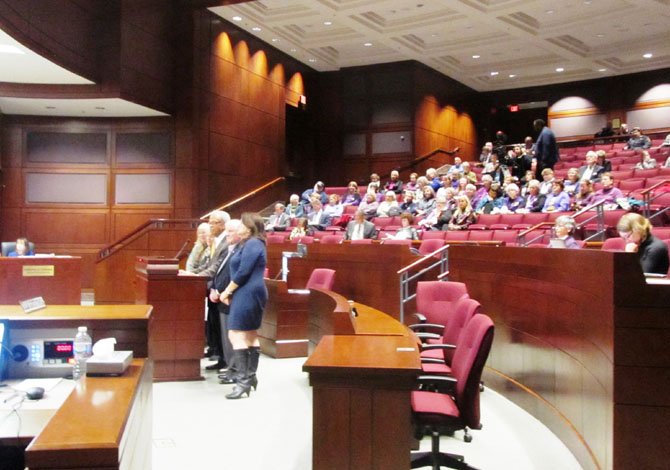 Library Board of Trustees Chair Willard O. Jasper (center), along with several other library board members, presented reports from two ad hoc committees appointed by the library board in September to conduct a series of public outreach meetings after trustees suspended the beta plan to the Fairfax County Board of Supervisors on Tuesday, Nov. 19. Recommendations included increased funding and discarding the controversial beta plan. Photo by Victoria Ross. 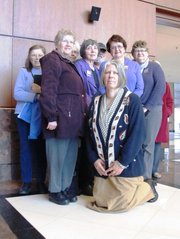 Wearing purple, about 50 library supporters gathered at the Fairfax County Government Center on Tuesday, Nov. 19, to show their support for the library board’s recommendations to the Board of Supervisors.

Library Board of Trustees: Who They Are, What They Do

The Fairfax County Public Library Board of Trustees, a 12-member, volunteer board is responsible for library policies and for making budget recommendations to the Board of Supervisors. The board meets on the second Wednesday of each month except August. Most meetings are held at 7 p.m. at George Mason Regional Library. The public is invited to attend. A maximum of ten people may register to speak on library concerns during the public comment period at each monthly meeting. For information or to register to speak, call 703-324-8324.

(Representative to FCPL Foundation Board of Directors)

"You can assume that the BETA Plan is dead. I will make that motion tomorrow."

In her email to a concerned library patron the night before the Board of Supervisors Nov. 19 meeting, Chairman Sharon Bulova (D-at-large) put to rest speculation that the board would resuscitate the controversial beta plan aimed at streamlining the county’s library system.

The next day, the board passed Bulova’s motion 8-1 to accept a report from the Library Board of Trustees, effectively killing the beta plan, which included proposals to reduce staff, eliminate the requirement for branch managers to have a master of library science degree, and reduce the number of children’s librarians.

Library Board of Trustees Chair Willard O. Jasper presented the reports from two ad hoc committees, appointed by the library board in September to conduct a series of public outreach meetings after trustees suspended the beta plan.

"For starters, there is no sentiment on the committee, the Library Board of Trustees, staff, or the majority of public commenters to move forward with the beta plan, including its reclassification of positions," Jasper told the board in explaining the blanket rejection of the beta plan.

"The predominant message (from the report) is that the library requires additional funding to maintain its high-quality selection," Jasper told the board. "The library budget has been cut 40 percent … spending in Fairfax County is the lowest in all eight neighboring jurisdictions."

In addition to accepting the report, the board approved Bulova’s motion to add a "consideration item" of $1 million to the fiscal year 2015 budget. "This additional funding would … be directed to the acquisition of non-fiction works," Bulova said. "More than 10,000 additional materials could be acquired with this funding."

Supervisor Michael Frey (R-Sully), who voted no on the motion, said he wasn’t pleased with the library’s report, and chastised fellow supervisors for distancing themselves from "the reforms we made."

He also praised Library Director Sam Clay for having the courage to "put the (beta) plan out there."

"I really was kind of shocked that the Board of Trustees would come back with a report that essentially says flatly ‘no’ to all proposed changes and ‘give us more money,’" Frey said.

"Our board has been saying to every department head tell us how you can do more with less, and they came back and said we'll do the same with more. And the supervisors said OK — here's million dollars more," Frey said. "They have seen how to get more money — just turn up the heat on us."

Criticism of the plan has been building since July, when Clay unveiled a program that would test a new organization model this fall at the Burke Centre Library and the Reston Regional Library, the busiest library branch in the county. Clay has defended the reorganization, saying that the goal was to streamline staffing while retaining a high level of service.

Vera Finberg, a librarian who attended the board meeting, said she was disappointed by the board’s discussion of funding.

"This is a rich county," Finberg said. "Do not tell us you value libraries and don’t have enough money to support them."

Finberg was joined by more than 50 library supporters — employees and volunteers — who attended the meeting to show support for library board’s recommendations.

They applauded when Supervisor Linda Smyth (D-Providence), dubbed the "dumpster diving supervisor," spoke. Smyth touched off a furious debate over how the library discards used books when she photographed dumpsters full of books in seemingly good condition that she found behind the library’s technical operations center in Chantilly this summer.

On Aug. 29, Smyth recovered dozens of usable books from the dumpsters, and then took them to county officials who ordered an immediate stop to the discarding. Smyth said she learned that more than 250,000 books have been thrown out since October 2012.

"One never knows what this job will bring," Smyth said at the board meeting, adding that she was still hearing concerns about discards.

"We need to be sure books are on library shelves as long as possible. Mending used to be part of process. This is something that seems to have fallen by the wayside, and that's putting it nicely," Smyth said.

Supervisor John Cook (R-Braddock) said he supported the library system and the public engagement process, but noted that libraries had to find ways to adapt to a world where the Internet has replaced newsprint and e-books have supplanted paperbacks.

"Libraries everywhere are changing as new technology changes the nature of information-gathering," Cook said. "If the answers were simple, someone would have thought of it already."

Most of the supervisors praised the patrons and staff who participated in the public meetings and committees. "We heard you," Supervisor John Foust (D-Dranesville) said. "In my opinion, in two months you've made tremendous progress." Supervisor Cathy Hudgins (D-Hunter Mill) said she was grateful that library staff also attended the meetings. "We should look at who we are and who we should be serving … Collaboration is important."

"Let there be no doubt in the community about the passion that citizens have about their libraries," McKay said. "We should be proud of all the responses we heard."

"First, local families love our libraries and library staff," Broder said. "Second, any so-called reforms which don't take advantage of librarians' expertise and which don't reflect the desires of the community are bound to fail. The Board of Supervisors needs to lead the effort to strengthen our libraries for the next generation."

Supervisors asked the Library Board to return in December with a plan for implementing the recommendations.

To read the Library Board of Trustees reports, go to http://www.fairfaxcounty.gov/library/news/communicationandevaluationreport.htm