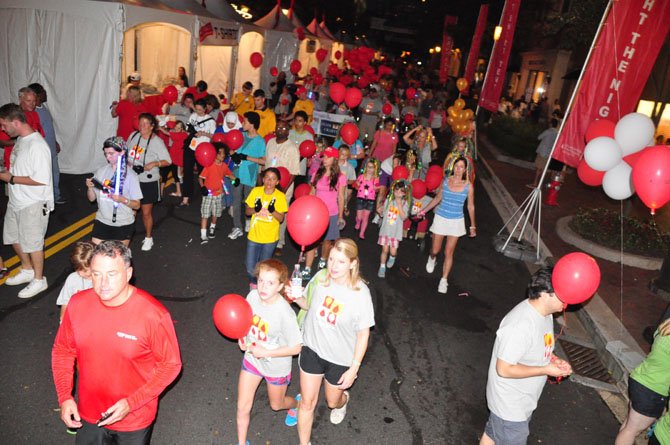 Reston — “Ava B” will turn 5 years old early next year, and spent more than half of her young life dealing with leukemia. She was diagnosed with pre-B acute lymphoblastic leukemia in December 2011 at age 2. Since then, she has undergone more than 20 months of chemotherapy, and seen her family and friends rally around her. 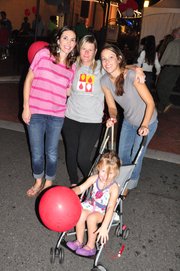 Team Ava, set up in her honor, participated in this year’s Leukemia and Lymphoma Society Light the Night Walk at Reston Town Center Saturday, Oct. 5. Last year, the team raised $8,700, and this year raised at least $7,000 before the walk.

“This walk has been one of the best experiences we could imagine,” said Ava’s mom Jeannie. “And this year is especially notable, because Ava will finish her chemotherapy in March 2014.”

Team Ava had more than 25 participants in this year’s walk, which helped raise money for blood cancer research and family support offered by the LLS.

“We are glad to support this walk because I know that if anybody is going to find a cure, it’s going to be because of the LLS,” Jeannie said.

The annual event is one of three walks that take place in the Washington, D.C. area. The walk took participants down Market Street from the pavilion, with walker carrying balloons in three colors.

White balloons are carried by cancer survivors, red for supporters of cancer patients and gold carried by those who are walking in memory of someone lost.

For Michael Robinson, general manager of Microsoft’s Health and Life Sciences, the walk’s corporate chair, the event was personal as well.

“I lost my dad to non-Hodgkins lymphoma 16 years ago. When he was diagnosed, he was given about 5 years to live, and that’s about how far he made it,” he said. “Today, he would have an 80 percent chance to survive. It’s the research that is funded by events like this, as well as the support the LLS provides to families, that make this an especially important event to me personally.”

One of the largest, and biggest fundraising teams at the walk was Team Zavadowski. Rich Zavadowski was diagnosed with Stage Four Peripheral T-Cell Lymphoma, a rare, aggressive cancer that was in his blood, lymph nodes, bone marrow and metastasized to his leg and ribs.

“After months of tests, hospital visits and consultations, Rich was accepted into a research protocol at the NIH’s National Cancer Institute. He underwent 650 hours of experimental chemotherapy over five months,” said Mary Ann Zavadowski, Rich’s wife. “Because of his participation in this research, not only is he helping doctors move one step closer to a cure, he has also been cancer-free. This September we celebrated five years. I know personally that this research is working and saving lives.”

The Zavadowskis started walking at Light the Night three years ago.

“We started with just the three of us, my dad, my mom and I, and just tried to grow as a team every year, and we’ve raised more than $75,000 in the past three years,” said Chris Zavadowski, Rich and Mary Ann’s son. “Since then, we’ve shared my dad’s story with other survivors, heard a lot of inspiring stories, and have been helped by an amazing group of supporters that are helping us raise funds that save lives.”

More information can be found at www.lightthenight.org/nca.