Candidates Have Their Say
Votes

Candidates Have Their Say 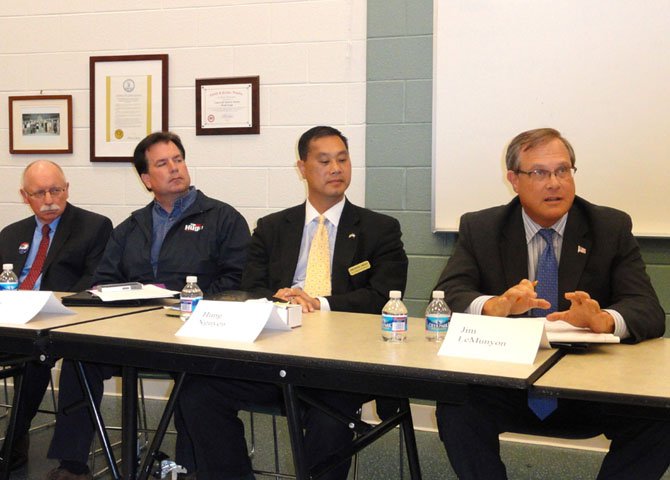 With the general election just a month away, a Candidates Night was held last Wednesday, Sept. 25, in Chantilly. Presented by the Sully District Council of Citizens Associations and the League of Woman Voters of the Fairfax Area, it let residents meet local incumbents and challengers and hear their positions on various issues.

Among the participants were Del. Tim Hugo (R-40) and challenger Jerry Foltz, plus Del. Jim LeMunyon (R-67) and his opponent, Hung Nguyen. To begin, each one told something about himself.

Foltz said he had organized a nonprofit, food co-op, worked with Habitat for Humanity, has lived in Centreville for 17 years and helped start Wellspring United Church of Christ here. “My experience working with congregations will help me in the General Assembly because I’ve worked to build consensus with others in the community,” he said.

He also noted how, a few years ago, he and his wife Alice joined with other churches and foundations to create the Centreville Labor Resource Center “to get [day laborers] off the streets and give them a place where they could get jobs and be paid fairly. It’s an example of how people with good hearts can work together to solve problems.”

Foltz said he supports Virginia’s recent bipartisan, transportation-funding bill and looks forward to “helping spend that money wisely and carefully.” But, he added, “We also need to support public transportation — we need to look at the whole transportation picture.”

Regarding education, he said his wife’s a retired teacher and he believes “we need to reduce class size and support problem-solving and creative thinking in the schools, as well as P.E., music and the arts.”

Hugo provides tax returns for low-income people and has served in the House for 10 years. “As a delegate, I try to focus on local issues,” he said. He then cited examples of how he’d helped the Virginia Run and Gate Post Estates communities, plus the Mulford School, solve problems they had.

Referring to the roundabout proposed for the intersection of Braddock and Pleasant Valley roads in Centreville, he said, “We’re going to take the fight to Loudoun. A traffic circle in that area will be problematic for all the people who live there.”

Hugo also noted how hard he’s worked to bring a bill on autism to the floor of the General Assembly, plus his battle against sex-trafficking. He said this practice “is happening in Virginia and it’s happening in Centreville. [Working together, Virginia] Democrats and Republicans now have some of the best laws in the nation on this.”

In his reelection campaign, said Hugo, he’s supported by many organizations, including the Virginia Education Assn., the Chamber of Commerce, Northern Virginia Technology Assn. and credit unions. And, he added, “The state firefighters endorsed me today.”

Saying he’s been a community activist all his life, Nguyen said transportation, education and the economy are his issues. “I live at Route 50 and Stringfellow Road, so I always encounter traffic,” he said. “The widening of Stringfellow has been going on for so long; it needs to get done already.”

Nguyen also said the state needs to “fully fund our priorities. Not doing this for education is putting our families and children at risk.”

He’s served on the Consumer Protection Commission and is vice-chairman of that organization, and is currently a member of the Virginia Asian Advisory Board, as well. He also stressed that Asians comprise 21 percent of the residents of the 67th House District.

Overall, said Nguyen, “I believe people of color, minorities and women should get their fair share. [Being a state delegate] is about getting things done.”

LeMunyon works in marketing and sales for an Internet trade association in Washington, D.C., and is running for his third term in office. “I’ve had 24 bills become law, and they were all bipartisan,” he said. “My focus is on transportation and education.”

He believes in synchronizing traffic and land-use changes. “VDOT can now comment on changes to Comprehensive Plans and whether they create more or less congestion,” said LeMunyon.

Noting that the Virginia General Assembly last year got a record amount of money for Fairfax County Public Schools for this school year, he said he’s been endorsed by the Virginia Education Association and was designated a “Legislative Champion” by that body for his support of public education.

LeMunyon said he is also a proponent of ethics reform in the state government. And he believes in keeping an eye on the effectiveness of new legislation. “We’ve go to make sure the transportation and education bills we pass are monitored to see if they get their intended results.”

In addition, he says tax reform can be a vital tool in improving Virginia’s economy. Said LeMunyon: “Tax reform is the biggest, untapped area to make businesses want to move here and to help existing businesses grow.”

Next, audience members asked the candidates their thoughts on various issues. Regarding Obamacare, Foltz said he’s in favor of it. “I know too many times that people with no health care waited until too late to get medical attention,” he explained. “And it’ll create 38,000 new jobs in the medical field.” Foltz also said he’s for the expansion of Medicare.

Hugo, however, said he’s a fan of “incremental change” and not something that would “introduce instability into the market. [Obamacare] will pay 100 percent initially but, later, we’ll have to pick up the rest. People are upset because their premiums are being jacked up. It’ll hurt businesses and union employees. So we should take its implementation slowly — think it through.”

Nguyen said, “We need to take care of the poorest of our community [first] and work out the finer points later on. If we don’t, we’ll all pay for it later when they get sick.”

But, warned Hugo, “People will have to decide which programs to cut and which taxes to raise, if we implement it.”

Al Francese of Little Rocky Run asked a transportation question. “I-66 is congested,” he said. “Any specific ideas to reduce the number of cars on it?”

Hugo said more people should be encouraged to telework. “The Route 28/I-66 project is our top project in the Northern Virginia area,” he said. “It impacts traffic from Arlington to Fauquier County, so money should go toward traffic mitigation.”

He also alerted residents that the situation is going to get worse. When Prince William County closes Route 29 through the Manassas National Battlefield Park, said Hugo, “Thousands more cars will go onto I-66.”

Foltz then told the crowd that “Hugo voted against the bipartisan transportation bill. I’m glad it got passed.” Not certain that the Route 29 road closure would really affect I-66, Foltz said he’d like to learn more about this project before taking a stand on it.

LeMunyon said there are 10 options for improving I-66. “There’s also rail, additional lanes, plus the extension of VRE [Virginia Railway Express] to Manassas and Haymarket, to get cars off the road,” he said. And he noted the Active Traffic Management program that’s already funded.

“In early 2014, there’ll be new signs and sensors monitoring traffic and speeds on I-66 from Gainesville to the Potomac River,” said LeMunyon. “So [extra] lanes will be opened whenever I-66 traffic gets congested.”

Virginia Run’s Ted Troscianecki then sought an answer from him regarding the roundabout. “Ninety-one percent of your constituents are Fairfax County residents,” said Troscianecki. “How can you support it?”

As things stand now, with a four-way stop at that intersection, replied LeMunyon, “People sit in traffic 15 minutes in a mile-long backup. If the roundabout isn’t the solution, then we need to find another answer.”

It’s a VDOT project that many Centreville residents say will give an unfair advantage to Loudoun motorists since more of them use that intersection than do Fairfax County residents. However, said Nguyen, “I don’t necessarily trust VDOT to make the best decisions [for us].”