Herndon — Growing up in Reston, David Bendernagel said he always thought writing was cool. His interests ranged from the fantastical to the realistic, and with his first novel, “The End of the City,” he has found a way to explore both of those themes in an unorthodox, but interesting way. 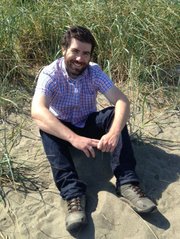 David Bendernagel, who grew up in Reston, has released his first novel, “The End of the City.”

“The book has two narrators, one is a teenage boy, a student at South Lakes High School, who is dealing with the death of his father and troubled by his obsessions with sports and comics, and the second is this comic book-type assassin who is feeling guilty over having just killed his best friend,” Bendernagel said. “They alternate chapters, and are both connected in some way, but neither are sure if the other one is real.”

Bendernagel continued writing while in graduate school, and that’s where he got the early ideas for the novel.

“I’ve always wanted to write a book, I’d done short stories here and there,” he said. “Some of the projects were about a teenager from Reston who was a student at South Lakes High School.”

As he continued writing and participating in workshops, Bendernagel said he found himself drifting from more realistic stories to “more fantastical, almost pulp fiction-style writing.”

When he figured out how to combine the two, the foundation for “The End of the City” was born.

“I left grad school with what I thought was a fun idea, it was interesting, but had sort of meandering quality, it wasn’t really publishable,” he said. “But as I got more comfortable with structuring the plot, it all came together.” 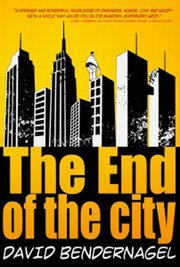 Reston native David Bendernagel has written his first book, “The End of the City,” which features a South Lakes student as one of the main characters.

During the writing of the book, Bendernagel and his wife moved around the country, to Iowa and Washington State, going to school and studying for degrees.

“I tried to do work whenever I could, whether it was while my wife was in school, or whenever I could squeeze it in,” he said. “I find it hard to sit down and just write for hours and hours on end, but after work I could come back to writing and be refreshed.”

The novel is Bendernagel’s first, he says he’s not the type that has unfinished novels in his closet waiting to be released.

“I was so interested in this story, and getting it right, that I think I learned how to write a novel with this novel,” he said. “I knew I had ideas I wanted to address, I just needed to find a plot that was interesting. But going in, I didn’t know how the characters would end up, I had ideas, but there was plenty of room for surprises.”

“The End of the City” was released Oct. 8, and is available at Amazon as a paperback or an e-book. More information is available at thepinkfishpress.com/publications/the-end-of-the-city/.