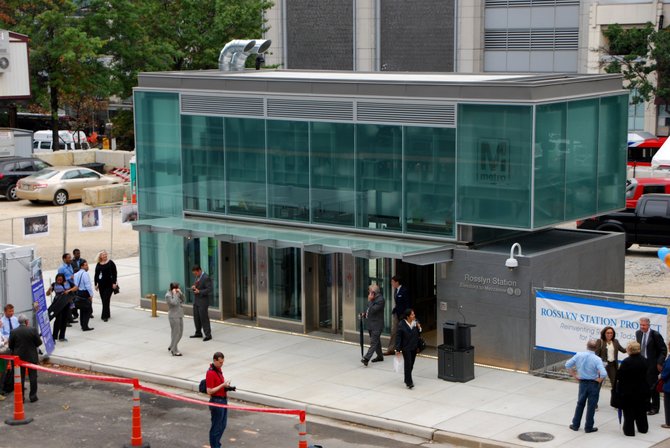 County officials staged a ceremony to celebrate the opening of improvements to the Rosslyn Metro station Monday. Photo courtesy of Arlington County government

Arlington — The high-speed elevators and new mezzanine at the Rosslyn Metro station were six years in the planning, a process that was delayed when developer JBG Properties was unable to move forward with a development that was supposed to be constructed concurrently. But when the global financial crisis dried up funding for the development, Arlington leaders decided to press forward anyway. Now commuters at one of Virginia's highest ridership stations in the system have three new high-speed, high-capacity elevators, a new fare mezzanine, a separate set of gates, a separate manned kiosk and a new emergency stairwell.

"It's kind of lazy to put off the cost of improving a Metro station on the commercial property owners."

"This project has a huge life-safety benefit, not only for the 36,000 people who use the station today everyone on the Orange Line and Blue Line and future Silver Line in that it enables us to get emergency response teams down into the station," said Dennis Leach, deputy director of Transportation and Development. "It also allows for an orderly evacuation in the event of an emergency either in the station itself or in the tunnel under the river."

Although Arlington sold the project as a $33 million improvement plan in the county's 2010 annual report, county officials say that document was a mistake. A look at County Board minutes from the last decade reveals that the $50 million price tag was revealed as early as October 2008. That was when the design costs increased by $430,000 and the anticipated opening expected to be "delayed by a few months but remains viable for a 2011 opening." That timetable was eventually delayed by more than two years.

Funding by the Numbers

"One cause of the cost increase was due to the county's requests and reviews of multiple design options for the emergency exit prior to the preferred location," according to an Oct. 24, 2008 memorandum. "Another major change occurred regarding the method of excavation and construction of the (Rosslyn Station Access Improvements Project)."

THE ORIGIN of the project dates back to the capital improvement plan for fiscal year 2003. By May 2007, members of the Arlington County Board approved a site plan for a development known as Rosslyn Central Place that included the Rosslyn Station Access Improvement Project. That plan included a new entrance concept, consisting of three new elevators, a mezzanine and emergency stairs. Funding was provided by state and federal sources as well as contributions from developers. But the largest source of funding was from commercial property taxpayers.

"It's kind of lazy to put off the cost of improving a Metro station on the commercial property owners," said Michael Porterfield of Tartan Properties. "Although they may have buildings on top of those Metro stations, there are residents that live across the street that walk over and enjoy the benefits of those things so it's lazy and overly simplified to say that the cost should be borne either exclusively or more significantly by commercial property owners."

Back in 2007, the Virginia General Assembly approved a source of funding for local governments that allows jurisdictions to levy an additional real estate tax on industrial and commercial properties for transportation initiatives. In April 2008, members of the Arlington County Board adopted a tax of $0.125 for every $100 of assessed value, yielding projected revenues of $24 million in fiscal year 2013 for transportation projects. Leaders of the Arlington Chamber of Commerce say they are pleased with how the fund has been handled so far.

"Nobody wants to pay any more tax than they have to," said David DeCamp, chairman of the Arlington Chamber of Commerce. "But we have to be taxed at some level in order to make a place like Arlington work, so I'm happy and I'm impressed with the way they've handled it."

THE ORIGINAL PLAN for improvements to the Rosslyn Metro station was that they were to be constructed at the same time as a major development in Rosslyn. The idea was that the improvements were needed to support a major high-density, mixed-use development. Documents show that county officials worked on a tight timeframe to meet JBG's construction schedule in order to piggyback on the development.

"Improvements must be coordinated with the design and construction of Rosslyn Central Place," wrote then County Manager Ron Carlee in a July 9, 2007 memo.

"When it became apparent that the extent of the developer's delay could not be determined, the county opted to move forward with its construction of the new station entrance to meet the passenger demand at the Rosslyn station," according to a July 23, 2010 staff report.

COUNTY OFFICIALS received two independent cost estimates as well as a bid from Clark to perform general construction services. Those estimates included trade costs and total estimated cost with "general conditions, special provisions and overhead and profit included." After a series of discussions, the county negotiations team and Clark agreed to a project cost of $32.6 million with allowances of $562,000.

"During a time when the focus of the country has been on what the federal government cannot get right, I am thrilled to be speaking at this shining example of what the government can achieve," said U.S. Rep. Jim Moran (D-8).