Langley junior plans to speak at local schools about teen depression and anxiety. 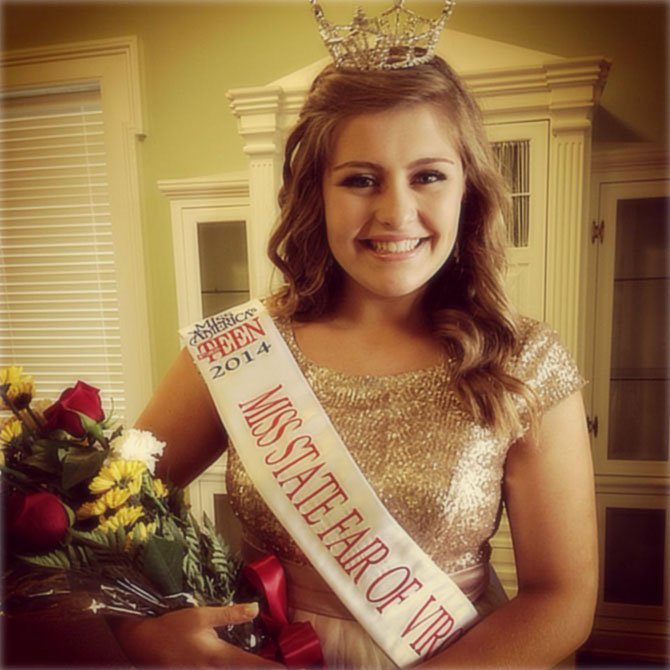 Hanna Rose Hunt had never been in a pageant before this year’s Virginia State Fair. So far, she is undefeated, as she was named Miss State Fair of Virginia’s Outstanding Teen.

“I heard about the pageant in June, and I saw that it had three parts to it, a talent portion, an interview and an essay where you talk about a platform that you’re passionate about,” said Hunt, who is a junior at Langley High School. “I’ve always been passionate about bringing awareness to teen depression and anxiety, and I thought this would be a great way to spread that awareness.”

Hunt says she’s suffering from depression and anxiety herself, and has also had friends who have attempted suicide, so she felt the need to speak out.

“It’s an issue that isn’t talked about much, because the people it affects are often scared and feel alone with what they’re dealing with,” she said. “I learned a lot doing research for my essay, and I want to be a role model when it comes to raising this issue.” She said she has always had her Christian faith and her love of music to keep her going, and Hunt used her example to show others how to get through their struggles.

“There are always things that you can hold on to that will get you through the rough times,” she said. “For me, it was my love of music and my faith, and holding onto those things, and realizing that I’m not alone. I learned that my depression is genetic, there have been members of my family in the past that have dealt with it, and I wish someone had told me what I’ve learned because that would have helped. I feel like I’m someone who people can come to, and I’ll always listen.”

CREATING HER PLATFORM and writing her essay were only one part of the challenges she faced at the pageant. For the interview section, she had to face a half dozen judges who peppered her with questions, none of which she knew beforehand.

“Going in I was a little nervous, just because I wasn’t sure what I was going to say. I knew I didn’t want to do the cliché thing and talk about world peace, and I didn’t want to sugar coat anything,” she said. “I’m used to performing and doing things on the spot, which I feel helped me a lot. I’m used to not second-guessing myself, because I know all that does is mess with your head.”

For the talent competition, Hunt performed an Adele song, or at least part of one.

“We had 90 seconds to perform for the talent part, which worked well for some kinds of performances, but songs are longer than that,” she said. “So I had to work out what the best parts would be, then cut the song down on my computer.

Her performance, as well as her interview, must have gone over well, because Hunt won the interview, talent and overall categories.

“I really wasn’t expecting anything, this being my first time, so when they announced me as the talent winner, I was shocked, but so happy,” she said. “That sort of took the pressure off, because I knew I could be happy with a win, but then they announced my name for the other two, and I was just dumbfounded. After that it was a whirlwind, we took a lot of pictures, and got to be in the parade at the fair, which was a lot of fun.”

HUNT IS CURRENTLY LOOKING AT COLLEGES, locally at schools like Georgetown, as well as schools across the country such as UCLA, Wheaton in Chicago and the Berklee College of Music in Boston.

“This experience has made me more confident as I prepare for things like college interviews. There’s a lot of appearances that come with winning, performances, benefit concerts,” she said. “I’ve always been very much an extrovert, I love to talk in front of people, it doesn’t scare me, so it’s been fun.”

Hunt will be taking her speaking skills to Longfellow and Cooper Middle Schools later this fall, to address teen anxiety, depression and other issues.

“I’ve never had any shortage of interests, I love to play sports, I was really into cooking for a while, as well as fashion design. The hard part is just finding time for it all,” she said. “But this experience has made me realize that I want to be a role model, I want to help people as much as I can, and I’ve been given a great opportunity to do just that.”