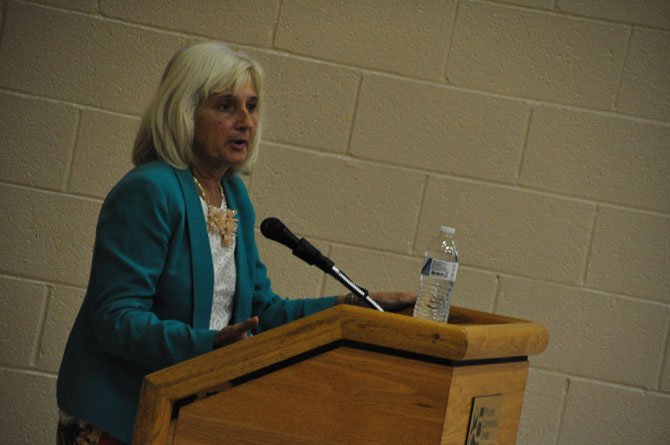 “I know there are reasons for starting it so early, but isn’t the point of the school system to provide the best environment for children to learn? If so, hopefully our school board will pay close attention.”

For almost everyone, the sound of their alarm telling them to wake up is one of the toughest parts of the day. Students are especially used to still trying to shake off the last of the night’s sleep while in homeroom or first period.

“There is substantial evidence to suggest that delayed high school start times may be one of the most important steps to take to ensure our teenagers are getting adequate sleep,” Owens said.

Sleep is recognized by the Division of Sleep Medicine as essential to facilitating memory retention, organizing thoughts, reacting quickly, working accurately and efficiently, thinking abstractly, being creative and gaining insight.

THE LACK OF SLEEP can lead to feelings of unhappiness, depression, hopelessness, as well as production of insulin, human growth hormone and other chemicals that control hunger.

“In adolescence, there is a natural, normal change in our body’s natural clock, what we call circadian rhythm. This occurs when they hit puberty, rather than a chronological age. What this results in is, on a practical level, the average teenager has extreme difficulty falling asleep before 11 p.m., because of this biologically driven shift in their circadian rhythms.”

Owens cautioned parents about exposing children to what she called “screen time,” on their computers, tablets and smartphones too close to bedtime.

Sitting in front of these screens just before bed can suppress the production of a hormone called melatonin, which is a very important biomarker of circadian activity,” she said. “Its production is dampened by light, thus making it more difficult to fall asleep.”

Electronics are only a part of the distractions that start impinging on the sleep schedule of the average teenager. Teens are biologically programmed to wake at 8 a.m. or later, Owens said, meaning that they’re in class at a time when their brains know they should be asleep.

“In particular, the latter part of our sleep is spent largely in what we call rapid eye movement, or REM sleep, which is absolutely critical for memory and learning,” she said. “We’re actively robbing students of this very important phase of sleep by asking them to wake up at 5:30 or 6 in order to get to school at 7-7:30.”

Most students deal with this by sleeping late on weekends. Owens’s research shows that students delay their bedtime on Friday and Saturday nights by an average of 1.5 to two hours, and delay their subsequent wake times by three to four hours.

“Does this help you make up for sleep lost during the week? The argument that I would emphatically make is no,” she said. “First of all, it doesn’t really help you function Monday through Friday to sleep late on the weekends. Furthermore, the practice of shifting bedtime and wake time further disrupts the normal circadian phase.”

Sleeping late into Sunday afternoon means that students will find it harder to go to sleep at a normal time Sunday night, thus ensuring another week of shifted sleep schedules.

The average high school student needs around nine hours of sleep per night, and gets about 7.25 hours per night. Owens says that this process results in a “sleep debt” of at least 10 hours per week, and this only gets worse as they move through high school.

THE SURVEY also indicated that 45 percent of eighth graders in the county get less than eight hours of sleep.

“In Fairfax County, you are probably at the worst end of the spectrum in terms of sleep,” she said. “People under conditions of sleep deprivation tend to take greater risks, but also perceive less in the way of negative consequences. When you put that in context of risk-taking behavior in adolescence, particularly something like driving behavior, that becomes a major issue.”

For many parents in the audience, the research done by Owens and her team served to back up the way they felt while their children were growing up.

“It was nice to see some scientific research to back up what I’ve always thought about my kids, that early in the morning their brain doesn’t seem to be firing on all cylinders,” said Eva Boudreaux of Falls Church. “When they were in high school, I used to worry a lot when they would have a big test in first or second period, just because that’s the kind of thing you want your brain ready to go for. Hopefully future students can avoid this problem with this kind of science.”

Since the late 1990s, more than 70 school districts with almost 1,000 high schools have made their start times later, and very few have gone back to the original time.

The Fairfax County School Board initiated talks with the Children’s National Medical Center in April of this year, and charged the center with developing an action plan to help the board start high schools after 8 a.m.

“I know none of my children will ever argue with extra time to sleep in the evening,” said Betsy Walker of McLean. “I know there are reasons for starting it so early, but isn’t the point of the school system to provide the best environment for children to learn? If so, hopefully our school board will pay close attention.”