Generals come from behind to win five-set thriller. 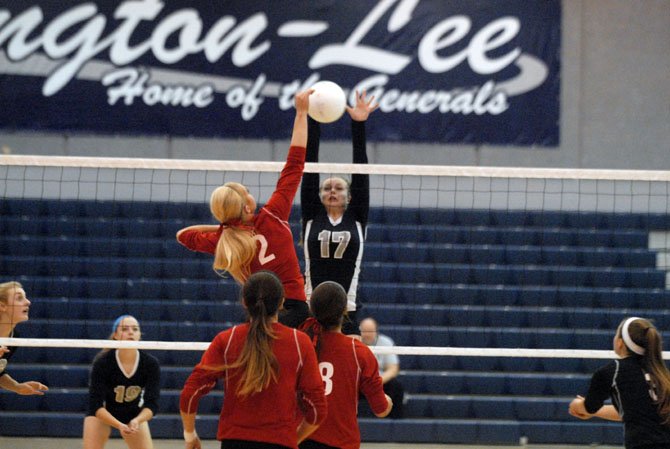 Washington-Lee senior Audrey Batcheller goes up for a block during Monday’s match against Madison. Photo by Craig Sterbutzel. 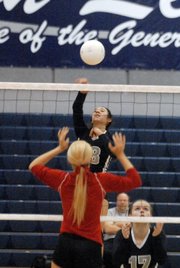 W-L junior Samantha Harris had 10 kills against Madison on Monday.

Facing the mighty Madison volleyball team, winner of 21 of its first 22 matches, the Washington-Lee Generals on Monday night had the look of both a contender and a pretender.

W-L won the first set, only to lose the next two in lopsided fashion. After staying alive with a tightly-contested 27-25 fourth-set victory, the Generals fell behind in the deciding fifth set.

A W-L attack error gave Madison an 11-7 lead, forcing the Generals to decide if Monday’s match would end as a valiant effort in defeat, or a statement victory against one of the top teams in the region.

“We just kept thinking of how big this game would be if we won,” W-L junior Samantha Harris said, “and that helped motivate us.”

W-L responded with four straight points and eventually captured the fifth set, 17-15, giving the Generals a come-from-behind 3-2 (25-22, 10-25, 14-25, 27-25, 17-15) victory at Washington-Lee High School. Harris, sophomore setter Meghan Fox and senior middle hitter Audrey Batcheller had key kills down the stretch as the Generals handed Madison its second loss of the season.

“This is incredible,” Batcheller said. “I feel like this is a big statement win. No one was expecting us to win this game and … it feels so good to get [the victory].”

Madison started the season 21-0 before losing to Langley in five sets on Oct. 16. As of Tuesday morning, the Warhawks were ranked No. 2 in the Washington Post’s top 10. W-L entered the match with a 15-5 record and riding an eight-match winning streak. After W-L won the opening set, Madison gained control with convincing victories in sets two and three. The fourth set was tied at 25 before back-to-back kills by W-L’s Batcheller and senior outside hitter Sydney Bell forced a fifth set.

“I don’t think our program’s ever really gotten a lot of credit for how good we’ve become. I think this is probably the one that everybody’s going to recognize it and go, OK, now [the Generals are] a team that we have to watch out for.”

The Generals led 4-2 in the fifth but the Warhawks responded with seven straight points to seize momentum. Madison couldn’t put W-L away, though, and the Generals pulled out the win.

“I don’t think our program’s ever really gotten a lot of credit for how good we’ve become,” W-L head coach John Delaney said. “I think this is probably the one that everybody’s going to recognize it and go, OK, now [the Generals are] a team that we have to watch out for.”

“It was definitely a little bit nerve-wracking,” Bell said, “but we came in as the underdogs, so it’s really nice to pull out the win.”

“Right now, I think our girls finally believe we’re one of the best teams in the northern region,” Delaney said. “… Now they have to realize they have to work harder because now everyone knows you. You made a name for yourself.”

At least one General is pretty confident.

“We play another huge team on Wednesday --- Langley,” said Batcheller, a senior captain. “I think they’re ranked first in our conference right now --- but not for long. We’re going to get the next one.”