Senior has 23 goals this season, 48 for career. 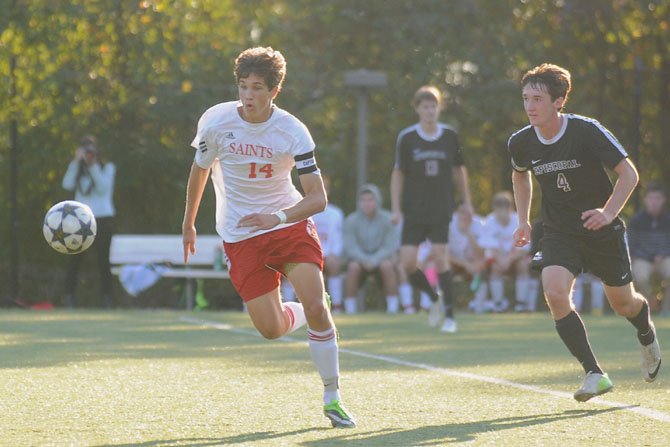 The senior captain scored three goals and had an assist as the Saints moved one win closer to an IAC regular-season title with a 5-1 victory against rival Episcopal on senior day at SSSAS. The Saints can clinch first place with a victory at Georgetown Prep on Friday.

“We struggled against Episcopal in the last game (1-0 Saints win),” Guidry said, “but we really came out focused in this game because we need two more wins to place first in the IAC and we’ve really been focused on that.”

Playing in his final regular-season home game for St. Stephen’s, Guidry started an early three-goal flurry for the Saints when he assisted a goal by freshman Jordan Wiley. Moments later, senior Alejandro Flores scored on an assist from junior Miguel Arrate and Guidry added a goal, giving St. Stephen’s a 3-0 lead in the 15th minute.

“It looked quite good, as well,” St. Stephen’s coach Bo Amato said of the Saints’ three-goal burst. “It was kind of enjoyable to watch, which is unusual when you watch a game of youth soccer. It can be quite painful.”

Late in the first half, Guidry showed some nifty footwork, dribbling through defenders en route to his second goal of the afternoon, giving the Saints a 4-0 lead in the 32nd minute.

“He’s determined, but (also) technically really good. … We haven’t had a kid that’s that prolific.”

“First I saw a little seem and dribbled through there and dragged it though there, and then actually I had a last player to beat before I got to goal,” Guidry said. “I had to fake a shot and touch it by him when he went for the fake shot and I was one-on-one with the keeper.”

With the Saints leading 4-1, Guidry scored his third goal in the 48th minute. Guidry’s hat trick improved his season total to 23 goals, giving him 48 in his four-year St. Stephen’s career.

Amato, who took over as St. Stephen’s head coach in 2007, said Guidry is the best goal-scorer he’s coached at the Alexandria private school.

The win improved the Saints’ record to 13-2-2, including 7-2 in the IAC. As of Wednesday afternoon, St. Stephen’s was ranked No. 5 in the Washington Post’s top 10. Friday’s opponent, Georgetown Prep, was ranked No. 6. The Saints last won the IAC regular-season title in 2011, before the addition of a conference tournament in 2012.

The Saints have advanced to the VISAA state semifinals each of the last four seasons and reached the 2011 state final, but haven’t won a championship. Is this the year?

“Until we get past that hump,” Amato said, “I’m feeling like Marv Levy and the Buffalo Bills,” who reached the Super Bowl four consecutive years but came up empty each time.