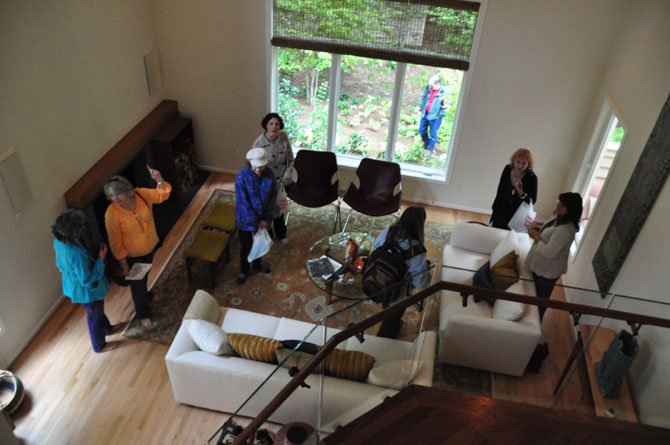 Reston Home Tour visitors explore the living room of Peter and Nedra Agnew Saturday, Oct. 19, one of the stops on the annual Reston Home Tour. Photo by Alex McVeigh.

Reston — Danielle Harrison has lived in Reston for 10 years. She has attended a few events at the Reston Museum, is excited for Reston founder Robert Simon’s 100th birthday next April and considers herself very knowledgeable when it comes to Reston history. But despite all that, while walking through a townhouse on the annual Reston Home Tour, she found herself dumbfounded. 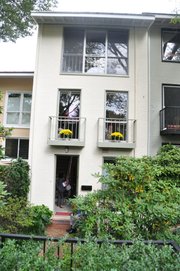 The townhouse of Ketsana Vongsavat, one of the stops on the annual Reston Home Tour. The home was the first occupied residence in Reston in December 1964.

“I walked through most of the house thinking what a wonderfully modern twist this house had. I figured it was an older house, given that it’s around Lake Anne,” she said. “But after I was outside, I was talking to a few people, and someone told me it housed Reston’s first ever residents, and I was blown away.”

The house, located on Orchard Lane, was one of five Reston houses on display at the annual home tour Saturday, Oct. 19. It was Wednesday, Dec. 9, 1964 when Samuel Furcron and his wife became Reston’s first family.

Today, the house is owned by Ketsana Vongsavat, the son of Laotian immigrants who grew up in Reston. Vongsavat picked up the sport of tennis at one of Reston’s summer camps, and parlayed that skill into a college scholarship.

HE SEARCHED for 14 years, from San Diego, Calif. to Austin, Texas, before he made his home in Reston, in what he calls “a one-of-a-kind house with amenities and luxury that would bring happiness and serenity every day.”

While Vongsavat’s residence is literally Reston’s oldest, another stop on the tour featured one of Reston’s state-of-the-art condominiums.

The home of Carl and Marsha Swerloff in Reston Town Center’s Midtown building is one of several residences they have lived in during their 45 years in Reston.

They purchased the unit from a blueprint, three years before it was ready to occupy, and the move forced them to pare down their cast collection of prizes gathered over a lifetime of traveling to flea markets from Virginia to Paris, France.

“I would have loved to see their collection before they pared it down, because I thought the decorations, particularly the French-style advertisements all over the walls, gave the place a wonderful charm,” said Seth Plummer of Reston. “It just shows the little touches that some time exploring all over the world and a keen eye can bring to a home.”

It was expansion in the mind of Peter and Nedra Agnew when they were searching for a new house five years ago. The couple decided they might be willing to move from their North Point town home if they could find a home with a first-level master suite.

“We had no desire to move away from Reston since we had the best of everything, fabulous walking and biking trails, great shopping and a farmer’s market, a hospital and a wide variety of recreational activities,” Nedra Agnew said.

The home on Hemingway Drive was carefully planned both inside and out. A handcrafted glass and fumed oak stairway, as well as an upper loft area, teak and walnut in the bathrooms and sandblasted oak on the fireplace are just a few examples of the varied custom woodwork inside and outside the house.

“The use of wood in this house is incredible, it makes it feel cozy, but also very modern, especially the two-tone cabinets in the kitchen, which are beautiful,” said Olivia Deutch of Vienna, referring to the cabinets made of light African anigre on the top and dark, American stained oak on the bottom.

The expanded master suite in the home of Don and Kim Casson, one of the stops on this year’s Reston Home Tour.

The Casson home on Wild Bramble Way is a more traditional house, but owners Don and Kim Casson have added many signature touches. Kim Casson, a designer, was working with the neighborhood’s developer on a project years ago, and was hired to do the model home in the Estates of North Hills.

THE COUPLE had already been thinking about moving with their newborn son from their Falls Church home, to a neighborhood with sidewalks to accommodate a stroller.

“We were already thinking about moving when Kim came home one night and said that it was a great neighborhood, one that we should look at,” said Don Casson. “We did, and two days later we bought our lot.”

The Cassons made several changes to the home as their family grew bigger. Their side sunroom is known as the “frat house,” because their sons used to hang out with their friends. In 1996, they added an elevated screened porch, which they called the “Casson Family Tree House.”

In 2007 they redid their kitchen as part of other renovations, adding a handmade stone arch and wall to the kitchen and adjacent wine cabinet and storage area.

“The use of stone in the house was great, it gave the kitchen a signature touch, something different that wasn’t expected with the rest of the house,” said Emily Raymond of Herndon. “And I really liked their selection of decorations throughout the house, especially the 19th century French armoire, which we were told the husband bought in pieces and built and finished himself.”