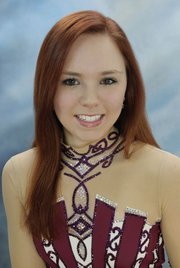 Local figure skater Christina Cleveland topped the competition in the recent 2014 Regional Figure Skating Championships. A junior lady, Christie won both the short and the long programs in the championships, held in Louisville, Ky. The top four skaters in each division progress to the Sectional Championships, which will be held in East Lansing, Mich. in November.

From there, the top four earn a spot in the 2014 US National Championships in Boston, Mass. This year, the national competition will also be the United States Olympic Trials for the Sochi Olympics in mid-winter.

Christie is a junior at Herndon High School and skates under Rashid Kadyrkaev at the Ashburn Ice House. Her team of coaches helps her to succeed. She does stretching, cardio, ballet, strength training and trampoline, as well as her on-ice regimen, as her daily fitness activities.