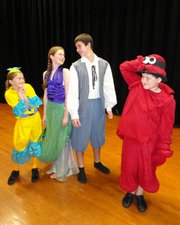 Ariel, Prince Eric, Flounder, Sebastian the crab and all the other characters from the popular story and movie are in The Alliance Theatre’s production of “The Little Mermaid Jr.” And a Robinson Secondary student has one of the starring roles.

“We have kids from at least 15 different schools,” she said. “A hundred kids auditioned and we knew right away who’d play which role—they all fit their parts. They work well together, too, and are having a great time with each other.”

The scenes take place on an ocean, in a ship, under the sea, on a beach and in a palace. And the actors will portray mermaids, crabs, fish, sailors, a prince and several princesses.

“The audience will be impressed and touched with the kids’ talent,” said Swan. “They’ll love the colorful costumes, cool lighting and neat special effects. And our villain, Ursuba—played by Chloe Gilfoil—is pretty scary. It’s a fun story families will enjoy seeing together.” 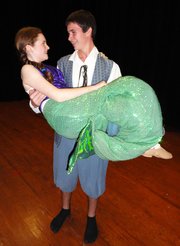 Playing the title role of Ariel, the mermaid, is Herndon Middle’s Allie Lytle. “Ariel’s spunky, fun, full of life, adventurous, proud, stubborn and curious,” said Lytle. “She’s in love with the human world and falls in love with a prince, so she asks Ursula, the sea witch, for legs. She gets them; but if by sunset after three days, she and the prince haven’t kissed, she’ll turn back into a mermaid and Ursula can keep her soul.”

Elijah King, a Robinson sophomore, portrays Prince Eric. “He’s adventurous, bold and loud, yet controlled and polite because he was raised to be a king,” he said. “He’s also kind and caring. It’s fun playing a Disney prince because you have the freedom to be big and animated. And I like how the cast is all different ages and personalities.”

King’s favorite song is “One Step Closer,” which he sings to Ariel while they dance. “It’s a fast-paced, ballroom dance in which she’s introduced as the prince’s love interest,” he said. King also said the audience will like the show’s message “to be yourself and follow your dreams, because good things happen if you stick with what you want.”