Fairfax students are in ‘James and the Giant Peach Jr.’ 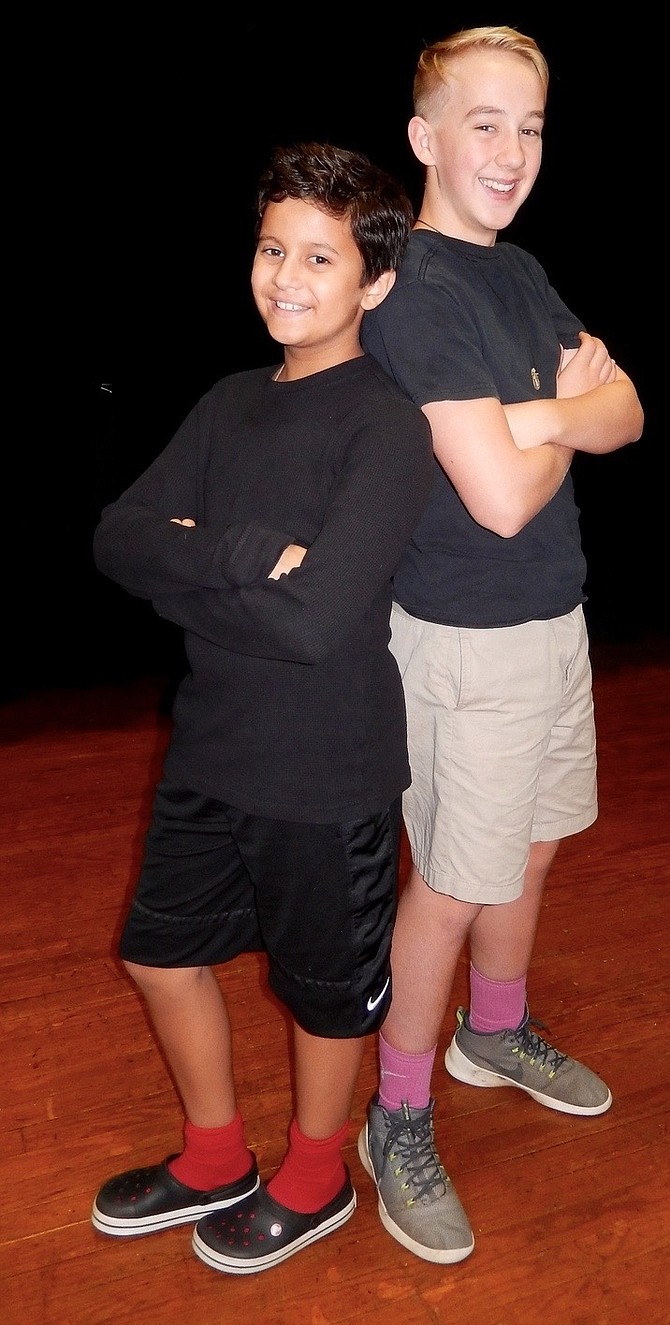 (From left) are Noah Tajudeen, who plays the title role, and narrator Will Mosier. Photo by Bonnie Hobbs.

Fairfax County — Alliance Theatre’s upcoming musical, “James and the Giant Peach Jr.,” is about courage and self-discovery. Featuring a cast and crew of 35, it’ll be presented Nov. 5-20, at Mountain View High in Centreville – and two of the lead roles are played by Fairfax students.

When 10-year-old James loses his parents, he has to live with his two mean aunts. But things get better when he discovers a magic potion that grows a gigantic peach. James then befriends a collection of singing insects that ride the peach on an adventurous journey across the ocean.

All the actors are in grades three through 12, and Director Maggie Swan says they’re talented thespians, singers and dancers. “Those playing insects even had to study the insects they’re portraying and put their characteristics into their roles,” she said. “And we’re using costume pieces and hats, more than makeup, to show who they are. So, for example, the grasshopper wears a green tuxedo and the ladybug wears a pillbox hat. The characters are so cute and fun that everyone will love them.”

A magical narrator will help tell the story and make things happen. And, said Swan, “The set will be a huge peach that’s really a jungle gym with different levels. And it’ll be like looking inside a peach.” She said the audience will like “all the quirky characters, plus the story about how James finds a whole, new life and family in some unusual ways. People of all ages will be able to relate to this show.”

Portraying James is Noah Tajudeen, 11, a sixth-grader at Fairfax Villa Elementary. “James is very lonely, but naïve,” said Noah. “He’s curious about things, but also sentimental because his parents passed away without saying goodbye to him. But as the story progresses, he gets more adventurous and confident and makes lots of new friends.”

Noah likes his role because, he explained, “In real life, I can be loud and rambunctious, but James is shyer. He has a lot of growth in this story and goes through many changes, including heartbreak, which I find interesting to play and explore. And it’s exciting having the lead role – that’s pretty cool.”

His favorite song is “On Your Way Home,” which he sings at the beginning. “James is wanting to go home and wishing his parents were still alive,” said Noah. “He’s sad because he doesn’t have any family and wants someone to love him.” Overall, though, he said, “This show is so incredibly funny and all the characters each have hilarious lines that will make the audience laugh. It also has a sweet message that family and love are the most important things.”

Fairfax High sophomore Noelle Buice plays a ladybug. “She’s very maternal, sweet and loving and turns the group of insects into a family,” said Buice. “She also steps in to become James’s ‘mother’ after his parents die.”

Buice loves her character because, she said, “I’m always looking out for my own friends. And she’s so kind and considerate of everyone, and helps settle conflicts, that I feel like I can relate to her. She also wants everything perfect and in order; otherwise, she gets anxious.”

She says audiences “will love the show’s whimsy. It’s funny, but with an underlying message of caring and acceptance, and that everyone can find their true family.”