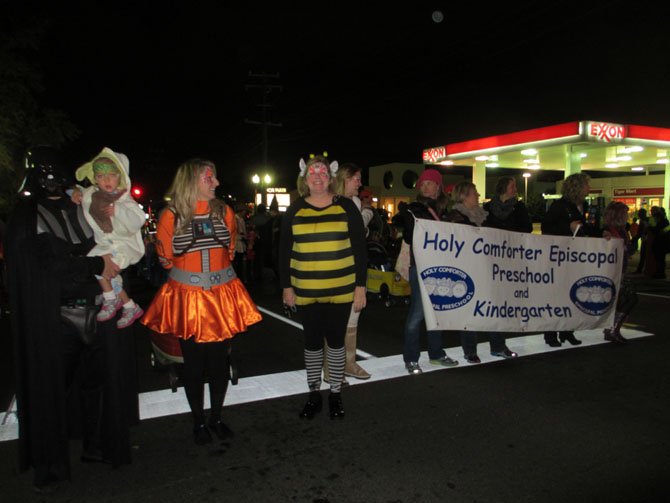 Youngsters from Holy Comforter Preschool and Kindergarten and their parents marched down Maple Avenue. Photo by Donna Manz. 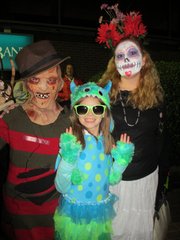 As chilly—and drizzly—as it was, the weather did not deter thousands of local families to line Maple Avenue on Wednesday, Oct. 23 to celebrate the 67th annual Vienna Halloween Parade. Hosted for the first time ever as a partnership between the Town of Vienna and the year-old Vienna Business Association [VBA], the parade featured Vienna Mayor M. Jane Seeman as its Grand Marshal in 2013. New this year was a concert presented on the Town Green by the School of Rock as an early evening prelude to the parade.

From marching costumed children to the Redskins Marching Band to local schools and businesses, the parade highlighted the best of Vienna. Over 100 entries marched in the hour-and-a-half parade. In parking lots and on side streets, friends and groups joined together in catered parties. Viewers dressed in costume, as well. Even some local restaurants set up tents and either gave away or sold refreshments.

The Vienna Business Association hosted a pre-parade social mixer for members, Town of Vienna officials and parade sponsors at Jammin’ Java. VBA has grown in one year from 26 members to 135 currently, and small business owners in the Vienna-area are invited to join.

To learn more about the Vienna Business Association, go to www.viennabusiness.org.