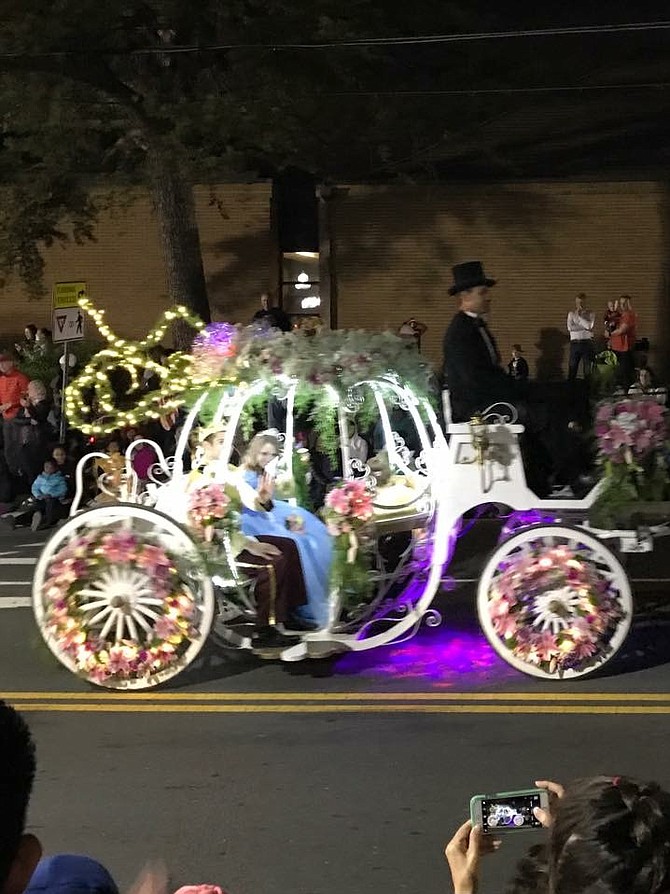 Karin’s Florist decorated a Cinderella “pumpkin” carriage for Cinderella and her prince to ride in … along with 8-year-old Abby Hamm who was voted by the community as the parade’s very own little princess. Vienna Business Association 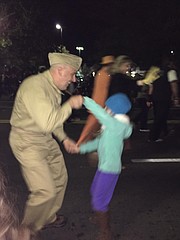 In tempo with the halloween parade’s theme of the Jivin’ Forties, a World War II G.I. dances with a young partner on the parade route. 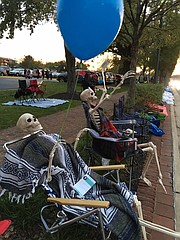 Not all place-markers were among the living … these skeletons kept watch throughout the day in front of Outback Steakhouse. 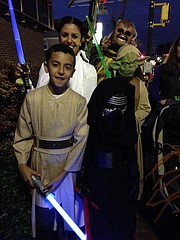 The Eftekhan family took inspiration for their personae from the Star Wars saga. As Yoda was 9-year-old Alya; Adan, 10, appeared as Luke Skywalker; and Laith, 6, dressed as Kyb Ren. Dad Amier was Chewbacca, and Mom LumA made a very convincing Princess Leia. 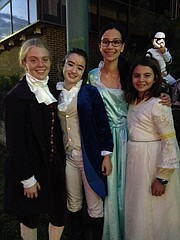 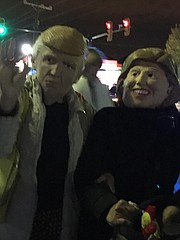 Look quickly because it is unlikely you will ever again see Hillary and Donald this friendly.

Vienna — By early morning on Oct. 26, Maple Avenue was lined with blankets, chairs, even tenting, to mark spectator-places along the halloween parade route between Branch Road and Center Street. A partnership of the Vienna Business Association and the Town of Vienna, this, the 70th Annual Vienna Halloween Parade commemorated the 1940s, the war years and the celebratory years of armistice --- “Jive Back to the 1940s.”

Thousands of Vienna-area families filled the parade route and the dry, balmy evening contributed to joy-filled ambiance. Again this year – as last – Star Wars characters, pirates, superheroes, princesses, and ghouls dominated the costumed scene. Elected officials, from the Vienna Town Council to Congressman Gerry Connolly, drew applause. The local Shriners raced around in a ballet of speed in their tiny cars, first-responders’ bagpipes wailed their mournful tones, Harley motorcycles roared with their riders in ghoulish-garb, high school bands and drill teams marched in choreographed routines, and local dancers lit up the night in sparkly costumes.

The first annual Vienna halloween parade debuted in 1946, a vehicle for local costumed kids to parade in safety. Over the years and decades, the parade grew larger and more extravagant. This year’s “Platinum” edition paid homage to troops and small-town America, as well as the eerie chills of the season.

Most parade marchers and participants kept to the motifs of spookyvignettes and the 1940s, from hearses and mysterious horses to ghoulish bands and USO-angled swing dancers. Floats and performers interspersed with hundreds of costumed kids and their parents marching down Maple Avenue. Sirens of police motorcycles and emergency vehicles heralded the beginning of the parade, and, signalled the end, as well.