Halloween Parade Steps Off on Oct. 23 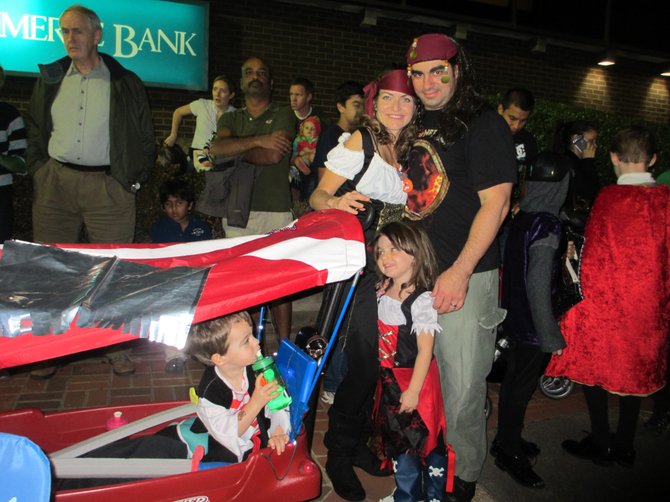 A pirate family views the Vienna Halloween Parade in 2012. Photo by Donna Manz. 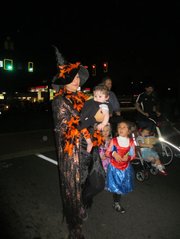 Costumed children and their parents march along Maple Avenue in the 2012 Vienna Halloween Parade.

With a theme of “Celebrating Music and Theatre Through the Decades,” the parade is led by Grand Marshal Vienna Mayor M. Jane Seeman. The parade was originally founded to give Vienna children an opportunity to dress in costume and march through the town. The tradition holds fast today.

Costumed children are invited to walk in the parade in their Halloween costumes. No registration is required. Costumed marchers meet at 6:30 p.m. in the parking lot of Virginia Commerce Bank, 374 Maple Ave. E. Children must be accompanied by an adult at all times.

“This is one of the top Vienna events,” said VBA logistics liaison and Artful Gift Shop owner, Peggy James. “This is totally down-home local, a family tradition for everyone. It gives Vienna a small-town feel with big city appeal.”

The 2013 Vienna Halloween Parade is sponsored by the Vienna Business Association [VBA] and the Town of Vienna. Special guests, sponsored by local businesses, include the Redskins Marching Band and Slap Shot, mascot of the Washington Capitals. Kicking off the parade are dozens of emergency fire and rescue vehicles, with sirens blaring and police motorcycles.

New for 2013 is a pre-parade show on the stage of the Town Green presented by the Vienna School of Rock. Musicians play from 5:45 to about 6:45 p.m., while Maple Avenue is still open to traffic. Maple Avenue closes down from East Street to Lawyers Road shortly before 7 p.m.

“It’s a multi-generational event,” said James. “Many of the parents who come with their children came to the parade as children themselves. They’re carrying on the tradition. It’s not just Vienna people; people come from all over the area.”

The parade committee offered tips on Halloween parade placeholders along Maple Avenue. Spectators are asked not to place any items on Maple Avenue prior to noon on parade day. Avoid placing spaceholders in bus shelters; the shelters are there for bus riders. Keep items off the sidewalks and benches, maintaining clearance for pedestrians. Secure all items; weather conditions may cause them to blow into the roadway or sidewalks.

The official reviewing stand is at the Town Green. Freeman Store, with its jars of candy and Virginia-made products, is open until 9 p.m., and many restaurants on Maple Avenue and Church Street are appealing to families for pre-parade dinners.

Each year, the Town of Vienna recognizes parade winners at a Town Council meeting in November. Categories include Youth Band, Float with Music, Youth Performer, Antique/Classic Vehicle, Adult Band, Float without Music and Adult Performer. The public is invited to attend the awards presentation.

For more information on the parade, go to www.ViennaHalloweenParade.com.