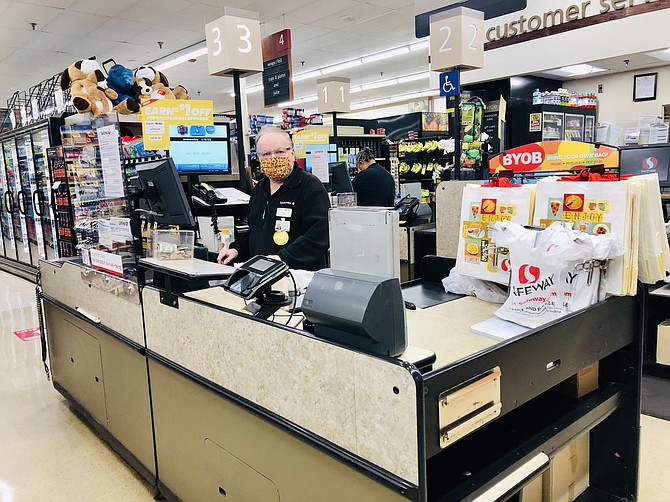 Grocery store employees, like people who work in the Safeway in Old Town Alexandria, qualify as workers at essential retail businesses under the governor's Executive Order 72. Under a bill introduced by Del. Elizabeth Guzman (D-31), they would be guaranteed five paid sick days a year. Photo by Michael Lee Pope.

Before the pandemic hit, Senate Democrats stopped a proposal requiring businesses to offer paid sick days. During the pandemic, they rejected it again during a special session. Now as lawmakers prepare for the upcoming General Assembly session, advocates are hoping they've finally got a strategy to persuade reluctant Senate Democrats to approve a new law increasing the number of workers in Virginia who have access to paid sick days. Del. Elizabeth Guzman (D-31) is introducing a bill that would require five paid sick days a year for essential workers.

"We know that there is slight support in the Senate," said Guzman. "So my conversations we've had with them is that this is something that they would be willing to support. So this will be the beginning."

For now, the beginning would require paid sick days for people who work 30 hours a week or 130 hours a month. Essential workers covered would include everything from firefighters and teachers to health-care providers and transportation workers. Advocates are hoping this streamlined version will be acceptable to conservative Senate Democrats, who are also blocking a ban on qualified immunity for police officers and the ability of state workers to engage in collective bargaining.

"We've gotten a bill through the House a few times, but not through the Senate," said Kim Bobo, executive director of the Virginia Interfaith Center for Public Policy. "So we're trying to address some of the concerns that have been raised by the senators."

WHEN DEMOCRATS seized control of the General Assembly last year, advocates for paid sick days were hopeful that they would be able to pass legislation requiring businesses to offer paid sick days. But business groups raised concerns that would be damaging to their profits, and they were able to kill the bill as the 2020 General Assembly drew to a close in March. Then the pandemic hit, and advocates tried an approach that was limited to the duration of the crisis. But Senate Democrats rejected that approach too after businesses raised concerns about surviving the economic downturn.

"I want people to take time off work when they’re sick," said Sen. Creigh Deeds (D-25). "But I wonder where this additional money is going to come from.”

Now advocates have narrowed their approach yet again, crafting a bill they hope will be able to get support from Senate Democrats. The bill does not apply to part-time workers, addressing a concern raised by Sen. Chap Petersen (D-34) who said he didn't think part-time employees in his law firm deserved paid sick days. It's also limited to essential workers, excluding most of the workforce, in an effort to gain some ground now and build on that success in the future. But Sen. Dave Marsden (D-37) says he won't support Guzman's bill unless the new benefit is spread out over three years.

"I'm fine with expanding it to everybody, but as long as you ease it in," said Marsden. "Like one day the first year, then maybe three days the second year, maybe five days in the third year — that type of thing."

"This makes good economic sense, but it's really about justice."

POLLING SHOWS widespread support for paid sick days, a reflection of public sentiment advocates are hoping will help them make their case as the 2021 session of the General Assembly begins next week. A poll commissioned by Virginians for Paid Sick Days shows eight out of ten Virginians support requiring employers to offer paid sick days. Support was strongest among African Americans and people with a high school education or less. The poll also shows 96 percent support from Democrats and 72 percent support from Republicans.

"This makes good economic sense, but it's really about justice," said Faith Harris, a theology professor at Virginia Union University who is director of Virginia Interfaith Power and Light. "Laws that provide protection and guarantee the rights of workers are moral, and they reinforce the value of life over material wealth and they establish the common good for all of us because when we protect the most vulnerable we are actually strengthening the rights of everyone."

Business groups have rallied against the effort to require paid sick days. When Democrats took the majority last year, several business groups formed a coalition to push back on some parts of the agenda of the new leadership in the House and Senate. The groups included the Hampton Roads Chamber, the Poultry Federation and the Virginia Manufacturers Association. They argued that mandating employers to offer their employees paid sick days would be bad for business.

"It's easy to make the business owners and the employers the bad guys here, but I don't think they are. I think they've worked their tail off to help these folks," said Stephen Haner, a senior fellow at the Thomas Jefferson Institute for Public Policy. "Businesses are concerned they won't be able to afford it or they'll have to hire fewer employees."

SEVERAL LAWMAKERS are working on bills related to the issue of paid sick days. Sen. Barbara Favola (D-31) will be introducing a bill that requires employers that already offer paid sick leave to allow workers to use it to care for a sick family member. Del. David Reid (D-32) is preparing legislation that is expected to require paid sick days for employers that have more than 35 workers, which advocates say would exempt more than 90 percent of employers in Virginia.

"We think that exemption is way too broad," said Bobo, adding that the Virginia Coalition for Paid Sick Days will oppose the Reid bill. "If it were a phase in over a few years so that eventually everyone gets covered we could support that. But with such a large carve-out, the coalition is not supporting it."

Most businesses already offer paid sick days to their employees without any legal mandate, although 1.2 million workers in Virginia do not have access to paid sick days. Guzman’s bill would be limited to a category of workers identified as "essential workers" as defined by the state health commissioner plus the workers at essential retail businesses as defined by the governor's Executive Order 72. That does not include restaurant workers, who would be exempt if the governor signs it in its current form. Restaurant workers who are working with the coalition say they would have preferred to have paid sick days when the pandemic hit in March.

"We really could have used paid sick days. There were very few tests available, and many people just kept chugging along because they thought they had a common cold or spring allergies," said Joshua Briere, a restaurant worker who is advocating for paid sick days. "When you are in the restaurant industry, you just have to chug along quite often because a day home from work could mean no groceries or a late rent payment."