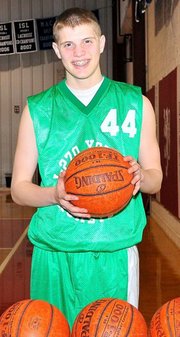 Reprinted from the Potomac Almanac

His sudden death rocked the community. Students and family crowded the Churchill gym to attend a candle light service in Evan’s honor on May 21. Students wore white. Friends created a Facebook page, Rest in Peace Evan Rosenstock, that quickly gathered more than 6,000 likes and multiple postings of photos, videos and expressions of grief.

Mourners filled the sunlit temple at Congregation Har Shalom on May 23 to celebrate Evan’s life. Evan’s grandmother, two sisters, cousin, rabbi and friend related stories and memories about Evan. Recurrent themes were Evan’s contagious grin, his sincere kindness and his passionate love of sports — both as a spectator and a participant.

Evan played on the Churchill varsity basketball team. He also played on the Flames and the Magic basketball teams in the Amateur Athletic Union (AAU) league. In addition, he was on the I-270 Potomac Team, coached by Eddie Jordan, former coach of the Washington Wizards and ... head coach of the Rutgers men’s basketball program, and assistant coached by Gheorghe Muresan, retired Washington Wizards player. Evan also loved the Washington Capitals and frequently could be seen sporting the red, white and blue jersey.

Potomac — Churchill and Bullis have joined together to host a basketball tournament and fun day this Sunday, Sept. 15 in honor and memory of Churchill varsity athlete Evan Rosenstock.

"We are looking to raise awareness about teen depression and suicide while inciting a cultural shift away from negativity, bullying, and abuse both on and off the court," according to the event website.

Erik Roberts is just one of Evan's friends at Churchill who worked with the Rosenstock family to start a movement called umttr (You Matter) that has a mission to "foster a community of students who are aware that they matter."

"We truly hope to bring some solace and closure to Evan's family, friends, teachers and mentors," according to Roberts. "We really wanted to take this tragic event that affected us all on the Churchill basketball team and turn it into an initiative that will have a positive impact on our community."

The Bullis School, 10601 Falls Road, will host umttr's inaugural 3-on-3 Basketball Tournament and Fun Day on Sunday, Sept. 15, from noon to 6 p.m. In addition to the tournament and skills workshops, there will be carnival games, arcade, amusements and prizes.

Proceeds will "support the formation of the Mid-Atlantic Chapter of the Positive Coaching Alliance and to support research on teen depression and suicide prevention," according to the web site.

Steve Young, NFL Hall of Fame quarterback and member of the Positive Coaching Alliance's National Advisory Board, says 70 percent of youth drop out of team sports by the age of 13 because "it just isn't fun anymore."

"When they quit, gone is the opportunity to teach important character building traits: self-confidence, resilience, teamwork, mental toughness, self control, respect for others," said Young.

"More than 70 percent of kids drop out of organized youth sports because it just isn't fun anymore."

Umttr seeks two purposes, according to its press release: to raise awareness of teen depression and suicide and to shift sports away from negative bullying and abuse and towards a team environment that is constructive and positive and fun.

Other events to raise awareness of depression and to educate teens on resources and supports available to them are scheduled later that day at Churchill High School.