‘The Best High-School Musicians in Virginia’ 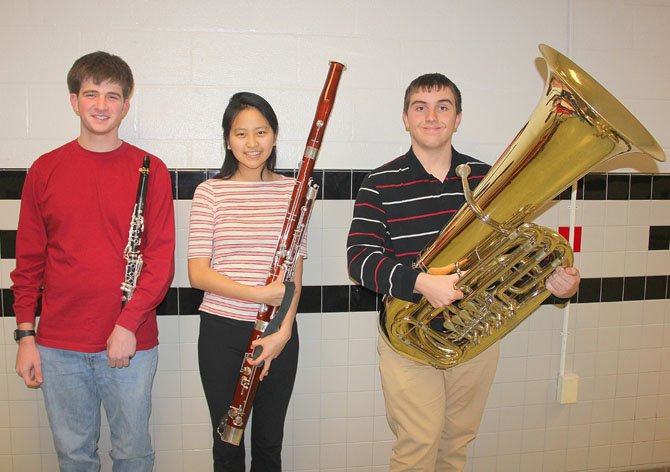 Only the top musicians in their district bands got to audition for All-State Band. Auditions were held Feb. 22 at JMU, with hundreds of students from across Virginia vying for a spot. Each had to play various scales, plus an excerpt from a song written solely for that audition. They also had to sight-read new music and play it on the spot.

"Making All-State Band was my dream," said Jeong. "To be in something like this, on a state level, is amazing. It’s really a great honor."

She had played flute as a child but, when she was a seventh-grader at Kilmer Middle, a local bassoonist talked to her class about that instrument and she was intrigued. She tried out for it and got to play it in Concert Band – but it was a big change from flute.

"A flute has a limited amount of keys to press and is fairly easy to learn," explained Jeong. "But a bassoon has nine left-thumb keys, alone, to press. So at first, I was totally overwhelmed because it was so different. I also had to learn different breathing techniques because it has a double reed."

But Jeong eventually grew to like it. "It has a human-like, warm tone and makes me feel unique and special," she said. "So I thank my middle-school band director for encouraging me to start playing it."

She’s also taken private lessons and hopes to play with Brown University’s orchestra after graduation. "It’s a nice way of connecting with other musicians, making beautiful sounds [together]," she said. At Madison, she’s been in the band’s woodwinds ensemble all four years.

Jeong also plays in the 150-person American Youth Philharmonic Orchestra. Students throughout the Washington Metropolitan area audition for it, rehearse together weekly and perform five concerts per season.

"There are four bassoonists total," said Jeong. "This gives me more experience and we’re playing top-notch, classical music. It’s always fun to play this instrument and tell a story with it."

Actually, this is her third time making All-State Band, and she’s looking forward to "playing great music with my friends and a top guest conductor. It’s a great privilege. Performing music has enriched me; I’ve met new people and just feel energized – I really love it."

Schwartz began playing clarinet in third grade, after attending a klezmer concert. "The clarinet player made all these crazy, wild and cool sounds, and I wanted to do it, too," he said. "I’d already played piano two years, so it was fairly easy to learn."

Toughest, he said, is "maintaining the position of your mouth over the mouthpiece to create a good sound." Best, said Schwartz, is "the clarinet’s range. It has the largest amount of playable octaves of any band instrument."

He especially likes jazz and even composes jazz-influenced music. After entering a composition contest, his piece was selected to be performed by Schwartz and other clarinetists, March 8, before the McLean Symphony.

"I was surprised because I didn’t know how they’d like it," he said. "It was humbling, but I also felt proud of myself; I hadn’t had a professional opinion of my composing before."

Schwartz also made All-State Band for the first time; 120 clarinetists tried out and he was the sixth-best. So he was thrilled "to think that, of all the top high-school clarinet players in the state, I’m sixth. Clarinet’s one of the most competitive instruments in a band because there are so many. I figure I’m lucky to be from the part of Virginia with such good teachers."

He’d eventually like to obtain degrees in music and in liberal arts or social science. But he’s got another year of high school to complete, plus the upcoming All-State concert, April 3-5, at Virginia Tech.

"My private clarinet teacher, Ken Lee, helped me work on the audition piece," said Schwartz. "He advised me where to breathe and helped me with the phrasing. I’m excited to see what they’ve chosen for us to play [this weekend] because these are the best, high-school musicians in Virginia – and we’ll only have two days to learn the music."

A tuba player, Niebergall made All-State Band for the second time. He also made it as a freshman, which is fairly rare. Playing that instrument since sixth grade, he said, "My elementary school needed a tuba player and I’m a relatively big guy, so it was a good fit."

The hardest part, he said, is that the tuba "requires an incredible amount of air to play. You need to move a lot of air through your system and through the instrument." But, he added, "Blasting all those really low notes entertains everyone. You don’t often hear jazzy or upbeat tunes with tubas, although they’re fun to play, so I like them best."

Niebergall said private lessons helped him and, since both parents directed high-school bands, he comes from a musical family.

Although he knew his All-State audition went well, Niebergall didn’t assume he’d make it. So, he said, "I was extremely happy to know I was getting in again. It’s awesome because you’re among the best of the best."

Looking forward to the concert, he said, "I think it’s going to be really fun and a great learning experience for me. I’ll be sitting next to people with even more extensive knowledge than me; and being near them, maybe I’ll get some of their expertise."

Niebergall’s advice to other musicians is that "private lessons are a gigantic asset and practice is the most important thing you can do." He said playing any instrument has many benefits.

"It stimulates my mind so I can think faster and learn better," he explained. "It’s also an exercise in problem-solving; sometimes, you have to break up a piece of music into segments to practice it and learn it. Then you put it all together." Besides that, he said, "It’s probably the core of my social life – about 99 percent of my friends are band members."