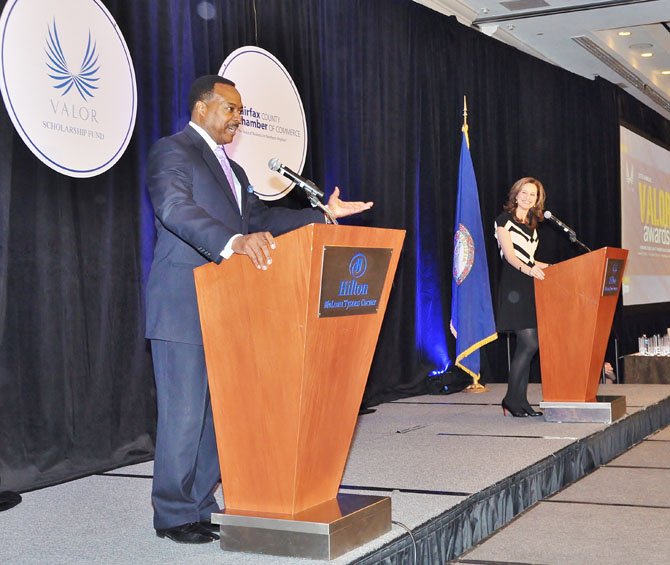 The 36th annual Valor Awards, honoring public safety heroes, was presented by the Fairfax County Chamber of Commerce at a luncheon at the Hilton McLean Tysons Corner on Monday, March 31.

For their efforts in rescuing a crew member from a crash site in the Republic of Kyrgyzstan, Firefighter and Medic Sally Dickinson, USAR Canine Handler Elizabeth Kreitler and Battalion Chief Michael C. Schaff were also honored with the Bronze Medal of Valor. Canines were also honored for that mission: Fielder and Garo, who was on hand to receive the medal around his neck from Fire and Rescue Chief Richard Bowers Jr.

The Gold Medal of Valor, which has not been handed out for years, was presented to First Class Police Officers Keith J. Baker and Edward L. Carpenter for displaying uncommon valor in the face of an extremely violent incident involving two armed assailants.

Connolly noted in his message to those honored: "Their efforts, made on behalf of the citizens of Fairfax County, are selfless acts worthy of our highest praise and respect."