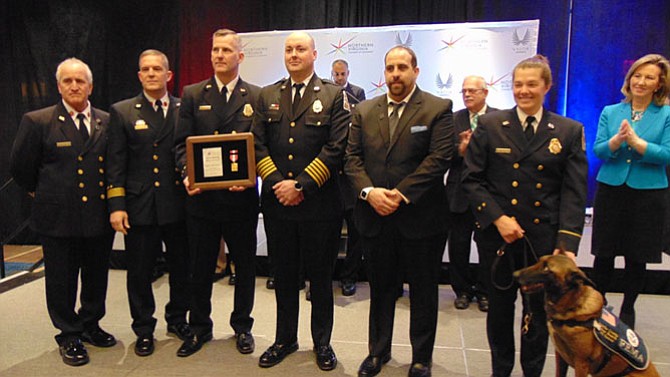 The 40th annual Valor Awards was held on Friday, March 9, at the Hilton McLean Tysons Corner honoring men and women who have shown valor, courage, and service to others. Every year the Northern Virginia Chamber of Commerce pays tribute to public safety employees in the Fairfax County Police Department, Fire & Rescue Departments, Sheriff’s Office, and Herndon and Vienna Police Departments for their exceptional bravery.

Chris Lawrence, News Anchor at NBC4, was the emcee, and the event was recorded in the official Congressional Record.

Officer Andrew Snow is awarded the Bronze Medal of Valor for his courageous actions in halting a vehicle, driven by a dangerous subject evading police. The subject brazenly continued to try and escape, but was stopped by the quick thinking and decisive actions of Officer Snow, who blocked the vehicle’s movement with his own cruiser, putting himself in close proximity to the subject. The wanted driver was taken into custody safely. Potentially placing himself in harm’s way, Officer Snow executed sound judgment in a tense situation, ending with a successful conclusion.

Second Lieutenant Scott F. Moskowitz, MPO Brian E. Plaugher, PFC William W. Daugherty, PFC Eric L. Harte, and PFC Gary Moore, Jr. are awarded the Bronze Medal of Valor for their brave actions in dealing with a violent, armed subject who evaded the officers in a stolen vehicle, with his pitbull by his side. The group of officers needed to quickly engage the erratic individual who ignored commands and was walking in traffic. MPO Plaugher utilized a catch pole to secure the dog and Second Lieutenant Moskowitz employed his canine training sleeve to corral the pit bull and the subject was quickly handcuffed. PFC Harte, PFC Moore, MPO Plaugher, PFC Daugherty, and Second Lieutenant Moskowitz performed valiantly under stressful conditions to quickly resolve a highly dangerous situation.

PFC Lindsey Memenza is awarded the Bronze Medal for her actions during an assault of a fellow officer. PFC Lindsey Memenza made her way to the scene, recognized the fellow officer and began issuing verbal commands to his attacker. As other officers arrived on the scene, PFC Memenza informed them of his identity, preventing a possible blue-on-blue use of force incident. They moved in and secured the subject without further incident, and quickly attended to their fellow officer’s injuries. PFC Memenza averted a potentially disastrous blue-on-blue situation and helped to resolve the situation quickly and without loss of life.

Second Lieutenant Peter Massaro and PFC Jose Morillo are awarded the Bronze Medal of Valor for their bravery and quick thinking during a stabbing incident with a wanted and dangerous subject. Lieutenant Massaro and PFC Morillo challenged the subject at gunpoint, issuing verbal commands in both English and Spanish to the subject. Both officers were able to secure the subject in handcuffs. Without a moment’s hesitation, Second Lieutenant Massaro turned his attention to the victims and rendered vital first aid to the stabbed individual until medics could arrive on scene and address the wounds. Their pursuit, and arrest of this dangerous criminal was nothing short of heroic and exemplary.

PFC Robert Wardrop is awarded the Bronze Medal of Valor for his actions which halted an intoxicated subject who was threatening staff at a restaurant with a knife he obtained from the restaurant kitchen. Armed with the knife, the man chased the restaurant manager and began swinging his weapon at other customers. PFC Wardrop was working non-regular employment at another location when he heard the call. Without hesitation, PFC Wardrop expeditiously responded to the restaurant and was the first to arrive. PFC Wardrop gave the man continuous commands while maintaining his composure. The armed man eventually complied and laid on the ground. With an unpredictable nature of the situation, PFC Wardrop’s quick and brave actions put a stop to the man’s rampage and prevented any further potential danger to the public.

Sgt. Brandon Pitts, 2nd Lt. Georgi Hovhannisyan, Private First Class Andrew Foxwell, and Correctional Health Nurse Deborah Kurylo are awarded the Bronze Medal of Valor for their actions in responding to a suicide attempt of an inmate. PFC Andrew Foxwell, Sgt. Pitts, and 2nd Lt. Hovhannisyan moved in to assist rescue in controlling the actively resisting inmate. Sgt. Pitts, 2nd Lt. Hovhannisyan, and Nurse Kurylo worked courageously and provided first aid to the inmate. All actions taken were crucial in saving the inmate’s life, who is recovering from his injuries. All four exemplified the Sheriff’s Office core values of honor, courage and service.

Captain Barry Rathbone and Firefighter Jeffrey Cockey are awarded the Bronze Medal of Valor for their acts of bravery involving a water rescue at Burke Lake Park. Two people had been rescued but a third occupant of the boat, an elderly male, was still missing. Knowing the water conditions were rough, Captain Rathbone and Firefighter Jeffrey Cockey entered the water and began their search and Eventually, they removed their personal floating devices and began to free dive into the water to cover as much area as possible. They acted without regard to their personal safety under extremely hazardous conditions in an attempt to save another life. They demonstrated professionalism, heroism, and dedication to serve and protect.

Lieutenant Scott Kraut and Master Technician Daniel Thompson are awarded the Bronze Medal of Valor for their brave actions in responding to a suicide attempt. The victim was rapidly removed from the home and quickly transported to a hospital. The patient arrived at the hospital breathing and with a pulse but succumbed days later as a result of poison. Lieutenant Kraut and Master Technician Thompson assumed great personal risk to rescue the victim. The scene was unstable, the status of the victim unknown, the hazardous material was undetermined. Without hesitation and performing under great duress, they made the rescue to provide the patient with best possible opportunity for survival. 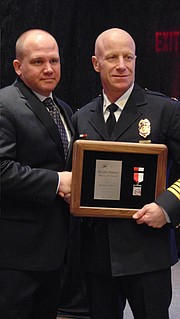 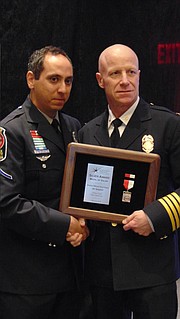 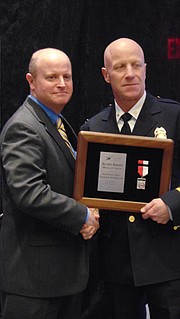 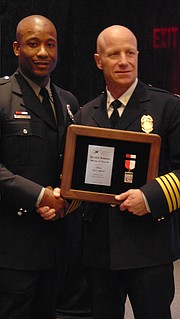 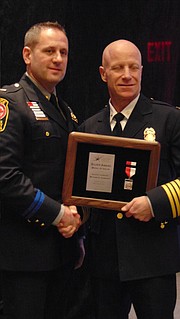 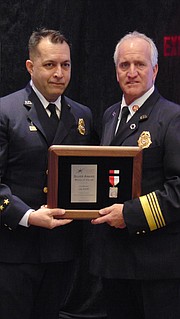 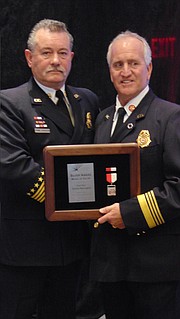 Pilot Garrett Wymer, MPO Douglas Middlebrooks, and PFC Ali Sepehri are awarded the Silver Medal of Valor for their brave actions involving a helicopter crash during the civil unrest that broke out in the City of Charlottesville. The crew quickly assessed their landing options and MPO Middlebrooks and PFC Sepehri hiked approximately 300 yards in order to gain access to the crash site while Pilot Wymer provided responding fire crews and ATC personnel with aerial coverage. The fully engulfed helicopter contained two fallen Virginia State Troopers and both MPO Middlebrooks and PFC Sepehri continued to search the wreckage for any other troopers at the scene. Without regard for their own personal safety, the crew of Fairfax 1 landed in an unfamiliar location without ground support in order to render immediate high level medical care to fallen officers. Pilot Wymer, MPO Middlebrooks, and PFC Sepehri demonstrated exemplary courage, composure, and compassion during an incident involving extreme personal risk.

Officer Isa Martin is awarded the Silver Medal of Valor for his bravery and quick actions when he arrived early to work and observed a man attempting to breach the station’s secure fences. Officer Martin drew his off-duty weapon while simultaneously issuing verbal challenges to the driver. With the help with another officer who arrived on the scene, they secured the subject without further incident. Despite his status as a new officer, Officer Martin handled this violent subject with both extreme professionalism and restraint.

Second Lieutenant Michael Gubesch is awarded the Silver Medal of Valor for his brave actions in halting a dangerous pursuit. Faced with a dangerous criminal that clearly had no intent to stop, Second Lieutenant Gubesch made a critical decision to end the pursuit before more lives could be put in harm’s way. He used his patrol vehicle to execute a perfectly timed Precision Immobilization Technique (PIT) that spun the vehicle around on the road. The subject brazenly continued to try and escape but was stopped by the quick thinking and decisive actions fellow officers on the scene. Potentially placing himself in harm’s way, Second Lieutenant Gubesch executed sound judgment in a tense situation, ending with a successful conclusion.

Fairfax County’s Urban Search & Rescue team, Virginia Task Force 1 is awarded the Gold Medal of Valor. In the effort to save lives and alleviate suffering, Fairfax County’s Urban Search & Rescue team, Virginia Task Force 1 was deployed to San Juan, Puerto Rico which had sustained extensive damage from Hurricane Irma only days prior to the arrival of Hurricane Maria. Upon arrival, the team immediately established a base of operations and conducted search and rescue operations in the Virgin Islands. While conducting lifesaving and humanitarian aid missions in Puerto Rico, Hurricane Maria formed as a Category 5 hurricane taking direct aim at San Juan. Even with the threat of the oncoming hurricane, the team continued their search and rescue operations on the Virgin Islands without thought of their own personal well-being. The team endured the assault of Hurricane Maria for 24 hours only to continue the search and rescue after the storm had passed. The members of VATF-1 acted without regard to their personal safety under extremely hazardous conditions. They demonstrated courage, dedication, and determination.